A decision at San Diego’s KPBS last month to stop local production for its reading service makes it the latest station to cut back on such operations, as digital platforms become more popular among visually impaired listeners seeking news and information.

The station’s around-the-clock service will continue airing readings from national publications provided by the International Association of Audio Information Services, an organization that supports reading services. But it stopped airing more than four hours a day of readings from the San Diego Union-Tribune and Los Angeles Times June 30 and has filled the time with national content.

The station had produced the broadcasts for decades with volunteers as readers. At the time it ended the service, it used more than 100 volunteers. 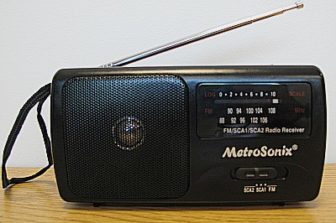 A radio used for tuning in reading services.

Meanwhile, visually impaired listeners are increasingly using digital platforms such as smartphone apps, web streams and smart speakers for spoken-word news, according to IAAIS and stations. That has reduced the need for the broadcast technology, which transmits programming on a frequency within the unused portion of a station’s 200 kHz of FM spectrum. Stations buy special radios that pick up the frequencies, providing them for free upon requests from listeners.

KPBS had noticed that fewer listeners were asking for radios, according to John Decker, director of programming. The station gave out just six radios over the past year. It estimates that 200 to 300 radios are still in operation in its listening area, down from 2,500 in 2000, Decker said.

“The concept of having a specialized radio that tunes to a subcarrier is a bit old-fashioned,” Decker said. “People … have a smart speaker in their house that reads news for them.”

Readings of articles from the Times and the Union-Tribune are both available through a dial-in reading service run by the National Federation for the Blind. Union-Tribune readings are also available on Amazon smart speakers.

Some volunteers who wanted to preserve the service have pushed back, Decker said, but “the vast majority of people I’ve heard from … totally understand the technology has left this service slice obsolete.”

Decker declined to say how much KPBS was spending to produce the local readings but said “it doesn’t come without expenses.” The station eliminated last month the position of a part-time employee who coordinated the service.

Yet over-the-air readings can still be critical for elderly visually impaired listeners, according to IAAIS President Marjorie Moore. Many older RRS listeners didn’t use the internet before losing their sight. “That’s where those specially tuned radios come in, because they’re so simple to use,” Moore said.

At WQCS in Fort Pierce, Fla., Operations Manager Joe Lenartiene said requests for subcarrier radios have also dropped. The station gave out four radios over the past year, compared to 20 to 30 per year around 2005. WQCS estimates that 500 radios are operational in its listening area.

But the station still offers two hours each day of volunteers reading from local newspapers, down from four hours daily in 2009. “We still wanted to provide the local touch,” Lenartiene said. “When we kept the two hours of local reading, we were still offering something that wasn’t readily available.”

WQCS offers its RRS on Amazon’s smart speakers. The station is increasingly telling visually impaired listeners to find its service on that platform “because there are so many things you can do through that,” Lenartiene said.

Update: This article was updated to include information about other platforms offering readings of the local newspapers previously heard on KPBS. The article has also been updated to clarify that KPBS eliminated the position of the part-time employee who previously coordinated the service.