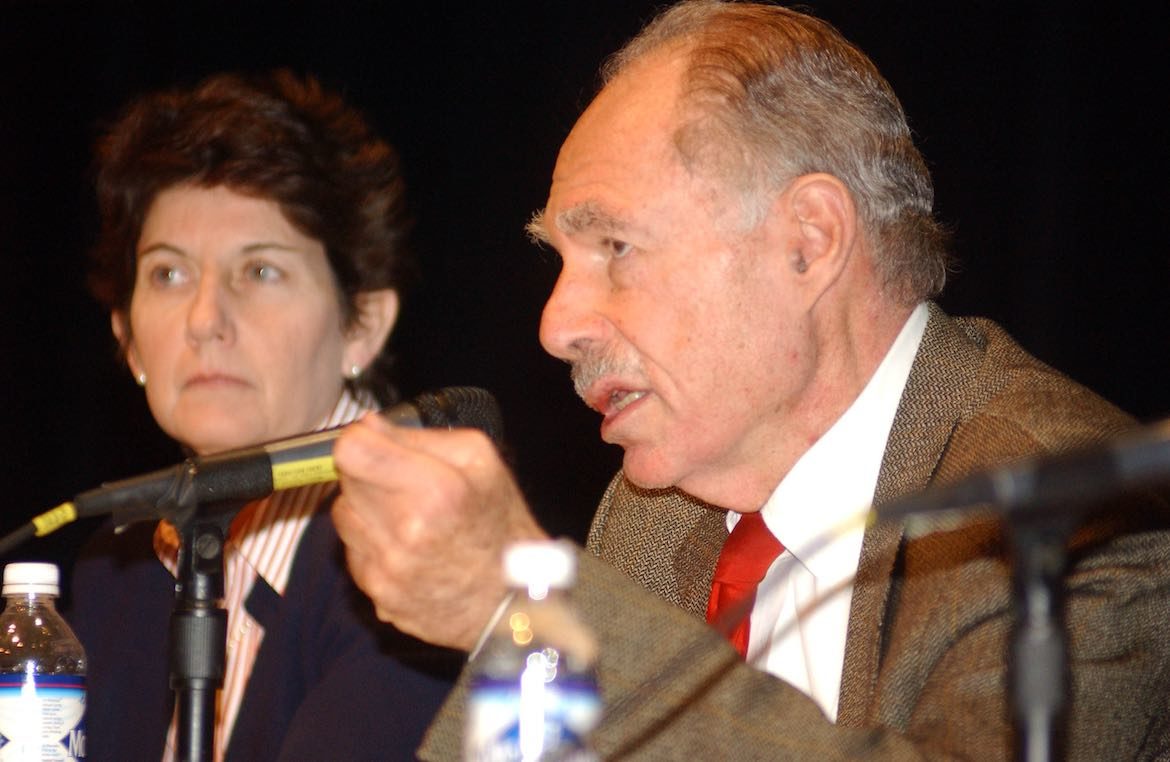 Lawrence Grossman speaks in Chicago in 2004 at a conference about the future of public broadcasting. Former CPB President Kathleen Cox is at left.

Lawrence Grossman, a former president of PBS who went on to lead NBC’s news division, died Friday at his home in Westport, Conn. He was 86.

Grossman died from Parkinson’s disease and oral cancer, according to his granddaughter, Rebecca Grossman-Cohen.

Grossman worked in advertising for CBS and NBC and ran his own agency before he was hired as president of PBS in 1976. He focused on strengthening the fledgling network’s national programming by building support for a common schedule that would attract corporate underwriting.

He also backed expansion of its signature news broadcast into the program that is now known as PBS NewsHour. At the time, public TV stations scheduled PBS programs in “a helter-skelter, non-uniform pattern across the country, making it virtually impossible to promote shows nationally,” wrote James Day, the late founder of San Francisco’s KQED, in his book The Vanishing Vision. 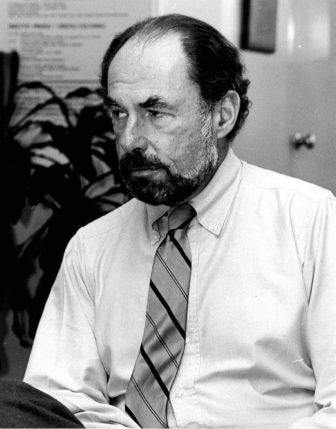 During his eight years at PBS, Grossman overcame member stations’ resistance to a core schedule, and the change increased PBS’s national profile and its audience. When the push to lengthen The MacNeil/Lehrer Report to a full hour succeeded in 1983, he had played a central role in creating the first hourlong nightly newscast on television at the time. Grossman was also involved in launching Frontline on PBS.

“He brought PBS, at the time, into modern media and what media could be,” said Neil Mahrer, a former PBS executive VP and COO who worked at the network during Grossman’s tenure. “He taught public television what synergy is all about and that, in fact, the sum of all the stations could be greater than the whole.”

Grossman also held fast against political and corporate pressure over “Death of a Princess.” Aired in the U.S. as an episode of World, the 1980 docudrama told the tale of a Saudi princess who was publicly executed for committing adultery. Pressure to withdraw the program from Congress and Mobil Oil — then one of public television’s top underwriters — tested PBS’s independence and integrity in ways that hadn’t occurred since the presidency of Richard Nixon, according to Day’s account. Despite these pressures, producing station WGBH in Boston and PBS held their ground.

“He defended public media as a space for in-depth examination of the issues of the day, … defying pressure to drop films that were controversial in their time,” PBS Chairman Don Baer and President Paula Kerger said in a New York Times obituary. “His courage was an inspiration to us all.”

Grossman left PBS in 1984 to become the head of NBC News. At the time, NBC’s news division was slipping in ratings, and his mandate was to turn it around.

When General Electric acquired NBC in 1986, Grossman fought with the new corporate owners over budget cuts, he said in a 2001 interview with historian Harry Kreisler. Grossman was dismissed from the network in 1988.

“He walked into the room, and you knew he could brighten it up. He wanted to be a mensch, and he was.” — Former PBS COO Neil Mahrer

After leaving NBC, Grossman taught at Harvard’s John F. Kennedy School of Government. He became the president of Horizons TV, a cable TV venture, in 1993.

In the later years of his career, Grossman took on policy initiatives to benefit public TV and educational media. He developed a proposal to provide a new source of revenue for public TV by allowing ad-supported programs to air on weekends. He also teamed up with Newton Minow, the former FCC chairman who led the PBS board at the time of Grossman’s presidency, to propose federal funding for educational uses of digital information technologies.

That effort led to the creation of Digital Promise, authorized by Congress in 2008 to promote “funding of research in using digital information technologies for teaching and learning.” Grossman was a board member for the nonprofit organization at the time of his death.

“Digital Promise would not have come to fruition without Mr. Grossman’s vision,” said Karen Cator, Digital Promise president, in a statement. “We are forever grateful for his tenacity and unwavering support and will carry forward his vision, seeking to fulfill the promise and ensure that ALL Americans have the opportunity to gain access to lifelong learning and career opportunities supported by technology and research.”

Mahrer characterized Grossman’s legacy as a long-standing record of intelligence, dedication and humility, and an overarching desire to promote public service.

“He walked into the room, and you knew he could brighten it up,” Mahrer said. “He wanted to be a mensch, and he was.”

Grossman was born June 21, 1931, in Brooklyn and graduated from Columbia University in 1952. He spent a year at Harvard Law School before joining the promotions department at Look magazine.

He was hired in 1956 by CBS’s advertising department and moved on to NBC in 1962 to become VP of advertising. From 1966 to 1976, Grossman ran his own advertising, communications and marketing agency.

Grossman is survived by his wife; daughters Susan and Caroline Grossman and Jennifer Grossman Peltz; a brother; six grandchildren; and two great-grandchildren.

An earlier version of this article included a quote from PBS that incorrectly described Grossman as a founder of Frontline. The series was created at WGBH by David Fanning and Peter McGhee; it was funded by CPB through an initiative managed by Lewis Freedman, director of CPB’s Television Program Fund.  Also, “Death of a Princess” was presented on PBS by World, a WGBH series that was a precursor to Frontline. The earlier version incorrectly reported that the docudrama was an episode of Frontline.