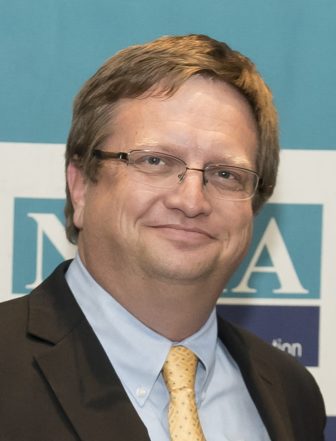 “Eric is a remarkable leader,” said Hinton, president for 28 years of NETA’s 50-year history, in the announcement Tuesday. “I’m very happy that he has accepted this position. Eric will ensure that NETA continues to support public media’s ongoing evolution in meaningful, relevant ways.”

Mississippi Public Broadcasting Executive Director Ronnie Agnew, who led the search committee, said Hyyppa “knows that he is replacing a legend, but those of us who’ve worked closely with Eric know that he is fully capable of putting his own stamp on NETA.”

Hyyppa took over leadership of MontanaPBS in Bozeman in January 2008, following a year as interim GM.

He started his career as the station’s computer system administrator in 1995, rising to manage information technology in 2003. During Hyyppa’s tenure MontanaPBS grew from a single station to a statewide network of six stations. He also expanded local production, oversaw major and planned giving programs and increased news and public affairs content.

Hyyppa is a past chair of NETA’s board. He is currently a member of the PBS Board.

He has also chaired the boards of America’s Public Television Stations, the public television Affinity Group Coalition and the Organization of State Broadcasting Executives.

“I’m honored, and I’m grateful to the board for the opportunity to lead this exceptional organization of dedicated and talented professionals,” Hyyppa said in the announcement. “NETA plays an essential role in public media, supporting stations and increasing their service to their communities. I am passionate about NETA’s role … and committed to our education mission.”

At MontanaPBS, Aaron Pruitt will take over as interim GM Oct. 2. Pruitt, who has been with the station 23 years, is associate GM and director of content.

One thought on “NETA selects MontanaPBS GM as next president”