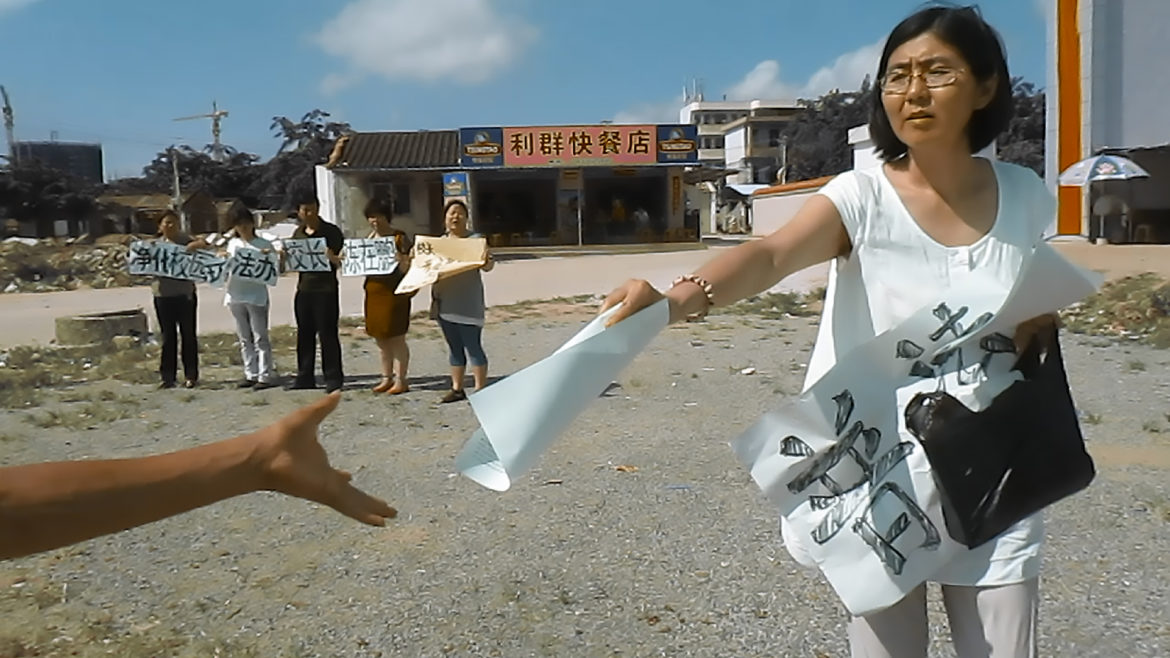 Chinese human-rights lawyer Wang Yu hands out copies of the UN Convention on the Rights of the Child during a May 2013 protest.

Frontline, Independent Lens and POV are among winners of Peabody Awards in the documentary category, announced Tuesday.

Honorees’ programs were released in 2016. Topics include refugees, warfare and sexual assault victims, according to a press release. Public media represented five of the 12 winners in the category.

Frontline won two awards. The Peabody Awards Board of Jurors commended correspondent Martin Smith’s “Confronting ISIS” for providing context about the war against Islamist extremists. The program “clearly articulates the political complexities behind the rise of the terrorist group, their strategies in recruitment and tactics, and America’s diplomatic missteps and heightened challenges,” according to the Peabody Awards.

And Frontline’s “Exodus,” described as an “intimate look on the refugee and migrant crisis,” also received an award. Filmmaker James Bluemel “eschews the need to render his subjects pathetic, instead showing their humanity and their attempts to keep this humanity in the face of their journey.”

Independent Lens is being recognized for “Trapped,” an examination of the motivation and politics behind the “TRAP” laws designed to restrict access to abortion. “Director Dawn Porter goes behind-the-scenes to follow the people working on a daily basis to keep clinics open under challenging circumstances,” according to the Peabody Awards.

San Francisco–based nonprofit AfterImage Public Media is a winner for “Audrie & Daisy,” a Netflix original documentary. The filmmakers were commended for presenting “a heartbreaking and timely tale of how social media shaming enacts a secondary and sometimes even more impactful traumatization of teen rape victims.”

And first-time filmmaker Nanfu Wang won a Peabody for POV’s “Hooligan Sparrow.” Wang is being recognized for taking personal risks to document the story of activist Ye Haiyan, also known as “Hooligan Sparrow,” and a “small group of women’s rights activists protesting the state of sexual assault crises in schools in China.” In February, Film Independent honored Wang with a Truer Than Fiction Award for an emerging director of nonfiction features who has not received significant attention. Wang was also recognized for journalistic achievement in documentary film by the George Polk Awards.

The Peabody Awards announced other winners last week, including the Independent Television Service for its work transforming the broader media landscape and public media.

More Peabody winners will be announced over the next week. Winners will be celebrated at a gala May 20 in New York City. The event will be taped to air on both PBS and the Fusion network June 2.

One thought on “Peabody Awards go to pubmedia documentary filmmakers”