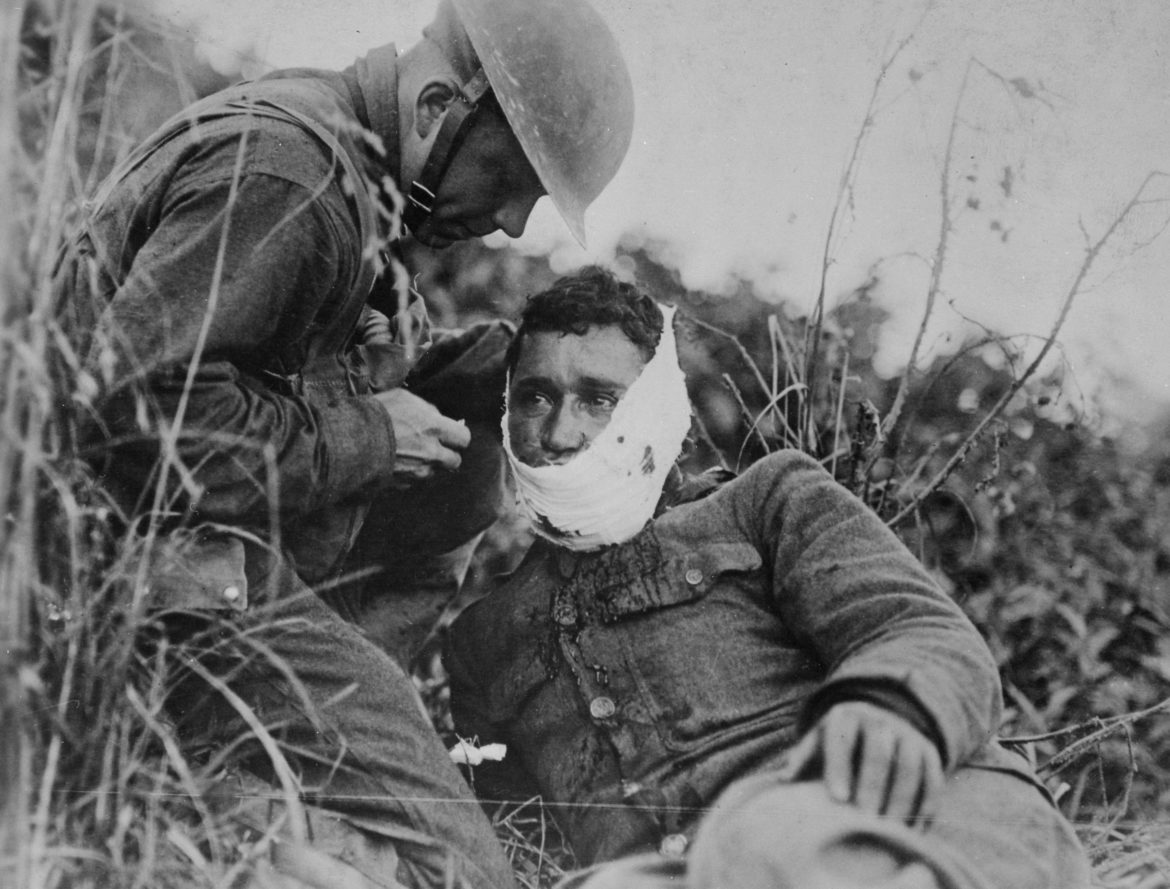 Two new docuseries on PBS revisit military conflicts of the 20th century as if through a time machine.

Instead of gazing at the conflicts as sequences of musty chronological events, The Great War, a six-hour film airing next month on American Experience, and The Vietnam War, a 10-episode epic debuting in the fall, offer fresh perspectives for a new generation of viewers. Both emphasize men and women in the grip of great historical forces, whether they were on the front lines or on the homefront.

Producers behind the series knew they had to approach these historic conflicts as had never been done before — and set out to define the projects on their own terms. In both cases, their fresh takes on historical events shed light on controversies of today.

“We took a deep breath and asked ourselves, ‘Hasn’t a lot been done? Hasn’t the story been told before?’” said Lynn Novick, producer and director of The Vietnam War with Ken Burns. “Why should we spend years of our lives and other people’s time and money and resources to go over something if it’s already been done?”

“Each generation has to rediscover and re-examine that part of the past which gives its present new meaning.” — Ken Burns

Novick recalled the WGBH production Vietnam: A Television History as “a landmark in public television.” She was an aspiring filmmaker when she watched the 13-part series in 1983 and marveled how well it was put together. Later, the History Channel’s 2011 series Vietnam in HD focused on 13 Americans who gave eyewitness accounts.

Mark Samels, EP of American Experience, wrestled with similar questions as he considered whether his production team should mark the 100th anniversary of America’s entrance into World War I with a new documentary. 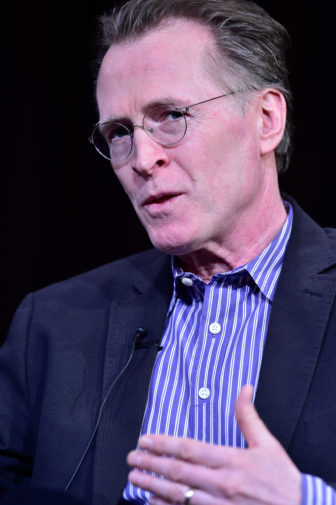 World War I was never popular with American filmmakers, said Samels and Stephen Ives, producer of The Great War, during an interview. Direct U.S. involvement lasted only six months, and the origins of the conflict seemed complicated and distant.

Documentarians have produced multiple TV series on the war, but did not look strictly through the lens of American involvement.

CBS News broadcast World War One, a 26-episode series, during the 1964-65 season. Another 26-episode series from 1964, The Great War, was a BBC co-production with the Canadian Broadcasting Corporation, the Australian Broadcasting Commission and the Imperial War Museums. The BBC and KCET in Los Angeles co-produced the 1996 series The Great War and the Shaping of the 20th Century with the Imperial War Museums. Within the past decade, the CBC and the History Channel in the U.K. have telecast separate documentaries focused, respectively, on Canadian participation in the war and interviews with veterans who had been recorded in the 1990s.

When Samels pitched a new American Experience documentary series on the war, initially PBS was skeptical, he said. “There were cocked eyebrows at the beginning.” Would there be enough visual material, enough drama? “Over time, they came to see it the same way I did, and they got totally behind it.”

For American Experience’s treatment, “We were able to narrow in on a more focused narrative and not get lost in the firehose of information,” Ives said.

There are many reasons to make new films about old wars, the producers said.

Production of PBS’s Vietnam: A Television History began soon after the war ended in 1975, Burns and Novick noted. Historians since have produced volumes of research on the war, partly based on documents and audio recordings only recently available to scholars.

“I lived through the entire Vietnam War,” Burns said, but in making this film, “the first thing I understood was that I knew nothing.”

New generations need reminders about war’s brutality and to be able to raise new questions within the framework of contemporary society, Burns added.

“We think of history as an objective act, that history is somehow going back to a certain time and place and saying what happened,” Burns said. History is also “the set of questions that we in the present ask of the past. It’s very much informed by our own fears and anxieties, our own circumstances.”

“What happens after wars is that we tend to glamorize and glorify them,” Burns said. “They become encrusted with the barnacles of sentimentality. Just look at the Second World War, which is now called ‘the Good War.’ It was the worst war ever, with 60 million killed. It is important to remind other human beings what happens when we go to war.”

People need to understand that wars provide opportunities for great heroism, but are also the worst things people do to each other, Burns said. 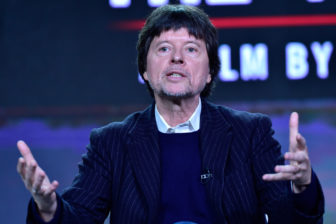 Burns recalled how his own career was shaped by historical analysis of the Civil War. When he was 8 years old, the nation observed the centennial of the Civil War. The commemoration mostly focused on the movements of troops and armaments.

By the time his landmark Civil War series debuted on PBS, in 1990, “We were interested in a different kind of Civil War,” Burns said. “We were interested in what African-Americans were doing. We wanted to understand who actually did the fighting and the dying, as well as continuing to make heroes of seminal figures like Lincoln and his generals, and Jefferson Davis and his generals.”

“All of a sudden you had a very, very different kind of Civil War. The war didn’t change, but the presentation did. It has to do with who was asking the questions. Each generation has to rediscover and reexamine that part of the past which gives its present new meaning through the exploration of the past.”

In a separate interview, Samels agreed: “There’s always a need to go back after a given amount of time or after some changes in the present.”

Over there, over here

While earlier war documentaries emphasized generals, military strategy and great battles, the new PBS series spotlight individuals caught up in the conflicts. Both The Great War and The Vietnam War are filled with stories about people in uniform and those on the homefronts.

The Great War highlights social reformer Jane Addams and author Edith Wharton. It’s also about Eugene Bullard, a black volunteer from Georgia killed at Verdun, and Alan Seeger, a Harvard grad whose poetry foretold his death at Somme. Viewers learn about Mary Borden, a nurse who gave her own money to set up a French mobile hospital. 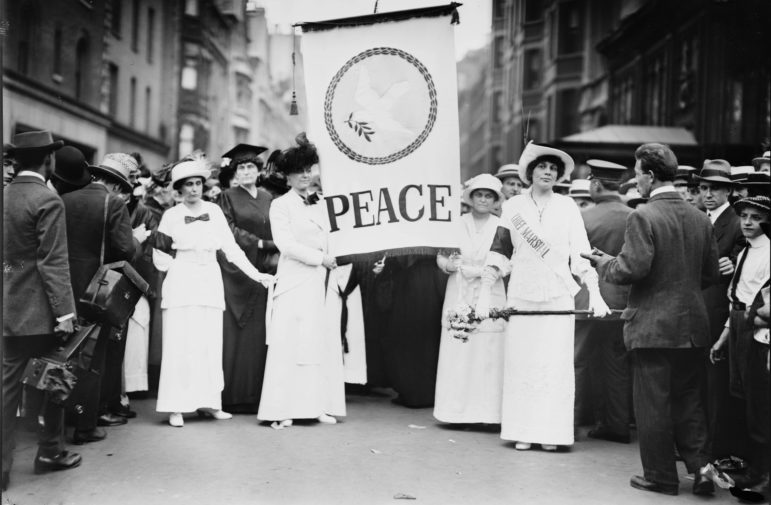 Participants in the Woman’s Peace Parade, organized in August 1914 shortly after the start of World War I, march down Fifth Avenue in New York City. (Photo: Library of Congress)

The series examines the chain of events that led to tradeoffs between civil liberties and national security. Footage reveals that as U.S. armaments to the British increased and German subs targeted American vessels, German-Americans faced increased scrutiny.

For The Vietnam War, Novick conducted dozens of interviews with people who lived through the tumultuous times but had been reluctant to talk about them. “For many Vietnam veterans, it was extremely painful because of how they felt the country treated them when they came home and how divided the society was,” she said.

She also spoke to North Vietnamese soldiers and Americans who fled to avoid service.

Burns said divisions in society today and the lack of civil discourse can be traced to passions aroused during the Vietnam War. “To go back and understand the roots of it, it may be possible for us to tame that beast a little bit.”

The Great War benefited from digital advancements that allowed producers to clean and brilliantly restore archival images. World War I was the first great subject at the dawn of moving pictures. Film was grainy and angles were necessarily wide, but the images captured were like nothing ever seen before.

“We did a tremendous amount of cleanup and restoration,” Ives said. “It was painstaking and exhausting but, in the end, really satisfying.” The visual impact of the restored video was so powerful that shooting new footage was largely unnecessary.

“It’s so surprising to feel and see what people were going through. You have this image of this war as a truly distant place, and yet the cameras were everywhere and they filmed a remarkable amount of things,” Ives said.

“We strive to create work that is as evergreen as possible, but we recognize that history is a very organic, dynamic thing.” — Mark Samels

The team behind The Vietnam War used new digital effects to create 3-D animated maps. Through the internet, producers were able to access interviews and other archival materials that weren’t readily available in the past, Novick said.

Yet, Burns said, it’s important to use technology to serve the story but not dictate how the story is told.

“Obviously we’ve got a lot more capabilities, a lot more bells and whistles, but everything is a double-edged sword,” he said. “Sometimes you can see films that are so concerned with the sizzle, they forget the steak.”

“That’s why I don’t concern myself with what my title sequence looks like. I’m interested in the content. I’m willing to spend 10 years to get it right. All the technology in the world won’t do that.”

Though both filmmaking teams aim to deliver series that make lasting impressions and endure, they recognize that someday it will be time for someone else to produce new documentaries on World War I and on the Vietnam War. But not soon.

“I hope The Great War has a very long shelf life,” Samels said. “We strive to create work that is as evergreen as possible, but we recognize that history is a very organic, dynamic thing.”

Burns said his history docs have a track record for longevity. “Civil War came out 27 years ago and it’s still looked at hundreds and hundreds of times each school day in schools around the country,” he said.

Correction: An earlier version of this article described Lynn Novick as producer of The Vietnam War. She is producer and director.