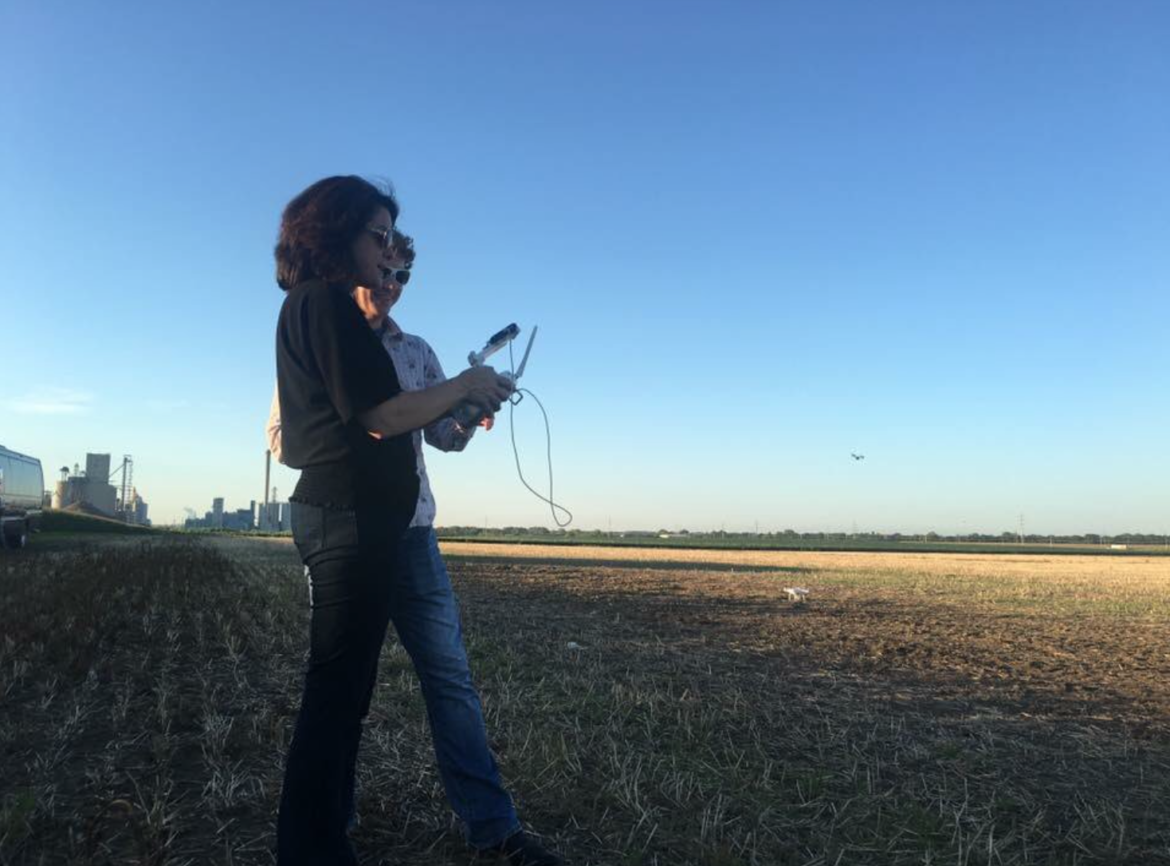 How fitting that our flight to Lincoln, Neb., to attend the Drone Journalism Bootcamp was diverted to Kansas City due to a thunderstorm. It says a lot about the uncertainties of airspace, especially in the Midwest. But we finally made it to Lincoln for a deep dive into the practicalities of drone journalism.

Over the course of three days, more than 60 journalists and media professionals explored issues of weather, safety, ethics, constitutional rights, regulations and more. Matt Waite, a pioneering drone journalist who teaches at the University of Nebraska-Lincoln’s College of Journalism and Mass Communications, led exhaustive but critical sessions about how to prepare for the Federal Aviation Administration test required for journalists who want to fly drones for commercial purposes.

By about 10:30 a.m. on the first day, attendees had collectively finished off eight gallons of coffee. “Am I that boring?” Waite joked to the audience.

Waite caught the drone bug in 2011 at a digital mapping conference in southern California. “There on the floor was a Belgian company called Gatewing selling a digital mapping platform in a drone,” Waite told me in an interview prior to the conference. “I sputtered and drooled as the demo video showed them mapping an area from the air, automatically, in a matter of minutes. And all I could think about was all of the hurricanes I covered in Florida. I couldn’t shake the idea after that.”

By November of that year Waite and colleagues started the Drone Journalism Lab and “jumped in with both feet.”

“Drones give storytellers access to airspace and visual perspectives that [are] otherwise inaccessible,” he said. “With the right hardware, they could also be used as a flying microphone platform, capable of recording sound from locations that are otherwise impossible to reach with an audio recorder.”

“As a part of the Platte Basin project, we’d like to add 360 video from a drone to our storytelling at some point in the next year,” Davis said. “Overall, we’d like to make drone photography and videography as routine as a Steadicam, and that means beginning to think about the ‘drone perspective’ from the ideation stage of a story or project.”

To stay relevant on a budget, Davis said that public media’s content leaders should “get to know what drones can do to truly add a third dimension to their storytelling and then begin to plan those elements into their content creations.”

The Platte Basin project is a good example of using multiple photographic techniques to add dimension to storytelling, said NET multimedia journalist Mary Anne Andrei. “We’re excited to add drones to our repertoire to help us tell ever more immersive stories,” she said.

“If viewers can understand a resource that most Americans don’t give a thought to … like undulating sandhills in western Nebraska, will they think about treating landscapes differently?” he asked. “Also, would we organize our society differently if you can see how the schematics of neighborhoods or towns are organized from above?”

Boston NPR affiliate WBUR sent associate producer Alison Bruzek to Lincoln. Bruzek, who focuses on science projects, said the station sent her as the first part of a developing strategy on ways to integrate drone journalism. As the WBUR newsroom covers an unusual drought in Massachusetts, WBUR management noted that “drones can actually help us discover parts of the story, as well as add to the telling.”

Rupert Macnee, NET’s assistant g.m., focused on the broadcast side of content. “I have no doubt that drones, as well as experimental work we are doing with 360 cameras and virtual reality, will allow NET to further its mission to engage and reflect the diverse community of Nebraska,” Macnee said. He noted that while it’s important to take advantage of new technology, it’s equally critical to discuss ethical considerations: “There is — at the risk of invasion of privacy — an editorial obligation for all of us to take this opportunity to go a step further to reveal new truths.”

As part of the News Media Coalition, a group of more than 20 news organizations led by Mickey Osterreicher, general counsel for the National Press Photographers Association helped the FAA shape its new rules on commercial drone use. Drone legislation, Osterreicher says, has been following a familiar dynamic: “Technology is on the forefront; the law is always trying to catch up.”

“Someone’s going to look back at this [debate] just like we look at the Brownie and go ‘Oh my god, what was all this fuss about?’”

SecondMuse’s digital media team in Nebraska included storytellers Matt Scott, Kendra Yoshinaga and myself. SecondMuse is an open innovation agency known for creative collaborations in the service of sustainability.  I joined SecondMuse in September 2015 after 22 years at NPR, as I was interested in the emerging field of impact journalism, also known as solutions journalism, sharing positive stories of innovation and connecting the dots around sustainability and social impact.

In the past nine months we have led global storytelling projects around ocean health, civic hacking, open data, citizen science, healthy eating and humanitarian disaster response. Along the way, we have turned to new storytelling tools to add dynamic engagement and perspective to our story campaigns. As part of our ocean storytelling, I snorkeled in Australia’s Great Barrier Reef reporting on the impact of coral bleaching firsthand. And in Monterey Bay, Calif., I reported from a sustainable abalone sea farm to demonstrate innovative solutions in aquaculture and ways to keep the oceans healthy and our food sustainable.

These and other storytelling campaigns have reached over 60 million people on social media in the past few months alone. We attended the Drone Journalism Bootcamp to explore how new reporting tools can be used for civic engagement and impact storytelling.

With the other journalists, educators, engineers and entrepreneurs — including representatives from Google, Twitter, Bloomberg News and National Geographic  — we gave feedback on a working draft of the Drone Journalism Lab’s operations manual. Attendees raised ethical considerations: When a drone is in the air, should a producer run the risk of distracting the pilot by directing shots? Should people flying a drone attached to a camera have any more First Amendment protections than those flying a drone without a camera?

Our team had an eye in the sky this past spring when we set out to tell the story of obesity and malnutrition in the Pacific and Southeast Asia — specifically in Tonga and Timor-Leste. As part of the story, we used a combination of drone footage and traditional footage to tell a multidimensional story, contrasting the beauty of the landscape with the dual challenges of addressing obesity and malnutrition. It’s an example of how, when used ethically, drones can inform and illustrate our stories in ways unthinkable in the past. The story supports a global Food Revolution challenge that we will kick off in September as part of LAUNCH, a diverse network of thinkers and innovators sourcing sustainable solutions in water, health, energy, waste, material and chemistry.

For journalism educators Kate Fink and Steve Fidel, the bootcamp was an opportunity to start thinking about ways to bring new storytelling tools into the classroom. Fink, who teaches digital journalism at Pace University, said she’s still thinking of ways she might include drones, VR and 360 in her curricula.

“If I pass the [FAA certification] test right away,” Fink said, “I might include a week practicing with drones in my Digital Newsroom course, in which students practice using a variety of tools to report stories in the local community.” At a minimum, she plans to discuss drones in her breaking news course. But she’s most interested in hearing students’ ideas about drones and how they can be used in reporting.

Fidel spent 26 years as a newspaper reporter and editor, followed by six years as a multimedia reporter for NBC affiliate KSL-TV in Salt Lake City. Now he teaches photojournalism, data research and news writing at Brigham Young University’s School of Communications. He’s been trying to bring drones into the classroom for two years.

Back in his TV reporting days, Fidel said, he was frustrated flying around in an expensive helicopter just to get weather and traffic live shots. “It cost the station at least $1,000 each time the chopper came out of the hangar,” he said. Meanwhile, the station was cutting reporters. Now, Fidel can envision drones with live video replacing chopper shots. Instead of spending $1,000 per chopper flight, stations can invest a similar amount in a drone and use it repeatedly.

On the third and final day of the conference, Osterreicher led a discussion on free speech and privacy issues. He traced the contemporary controversy over drone photography back to the 1880s, when a book called That Horrid Camera advised readers to “put a brick through [the amateur photographer’s] camera whenever you suspect that he has taken you unawares.”

“Someone’s going to look back at this [debate] just like we look at the Brownie and go ‘Oh my god, what was all this fuss about?’” Osterreicher said, referring to the early Kodak Brownie camera.

One of Osterreicher’s first jobs was in 1969 at WBFO, the radio station at the State University of New York at Buffalo. Around the same time, WBFO General Manager Bill Siemering left with a few other station employees to start NPR. When the fledgling network broadcast its first show, All Things Considered, to its affiliate stations, Osterreicher was working WBFO’s control board.

Today, Osterreicher is pioneering frontiers in drone journalism. “I was asked about the use of drones for newsgathering for a story, which got me thinking about its potential,” Osterreicher said. “The more I researched the similarities between the chronological development of photography and manned flight, the more obvious it seemed to me that the use of drones in this way was just the natural progression of these two technologies.”

The real challenge, Osterreicher said, is getting bureaucratic institutions to catch up.

Davar Ardalan is director of storytelling and engagement at SecondMuse. She previously served as senior producer and social media strategist for NPR’s Identity and Culture Unit. Ardalan first joined NPR in 1993 as a production assistant and later worked as supervising producer for Morning Edition. She has been recognized with two National Association of Black Journalists Awards, a Gracie Award from the American Women in Radio and Television and a shout-out in the popular comic strip Zippy.

Leave a Reply to My Drone Choice Cancel reply