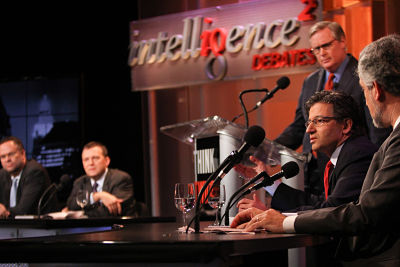 Now that the primary debates are over and the presumptive presidential nominees are set, a producer of a public radio show would like to fix a few things.

Are you tired of political candidates waging personal attacks on each other rather than debating issues? Have the debates become more theatre than substance?

If you’d like to change political discourse in the U.S., then the producers of public radio’s Intelligence Squared U.S. wants you to sign this Change.org petition.

The nonpartisan nonprofit says the Oxford-style debate format, used in the show’s showdowns, can save our broken system of political debate.

Here’s how it would work: Sharply framed resolutions — for instance, “give undocumented immigrants a path to citizenship” or “the United States intervenes abroad too often” — are devised for one side to support and the other to oppose.

The Democrat and Republican each start with an opening statement that they deliver without interruption. Then the contenders address and rebut the best arguments their opponent has made. The moderator’s role is simple, but vital: to ensure that the candidates actually debate each other—that they respect the process, respond to points made, refute or concede as necessary, and honor time limits. The debate ends with two-minute closing arguments, a final opportunity to sway the audience.

In 2016, a debate like this would be a gamechanger.

At last count, the petition had more than 2,100 signatures.

The organization argues that this style of debate would force candidates to make fact-based arguments and could help to expose their weaknesses. The public would hear what candidates actually know and not just prepared talking points.

The organization says the petition will be delivered to Hillary Clinton, Donald Trump and the Commission on Presidential Debates.