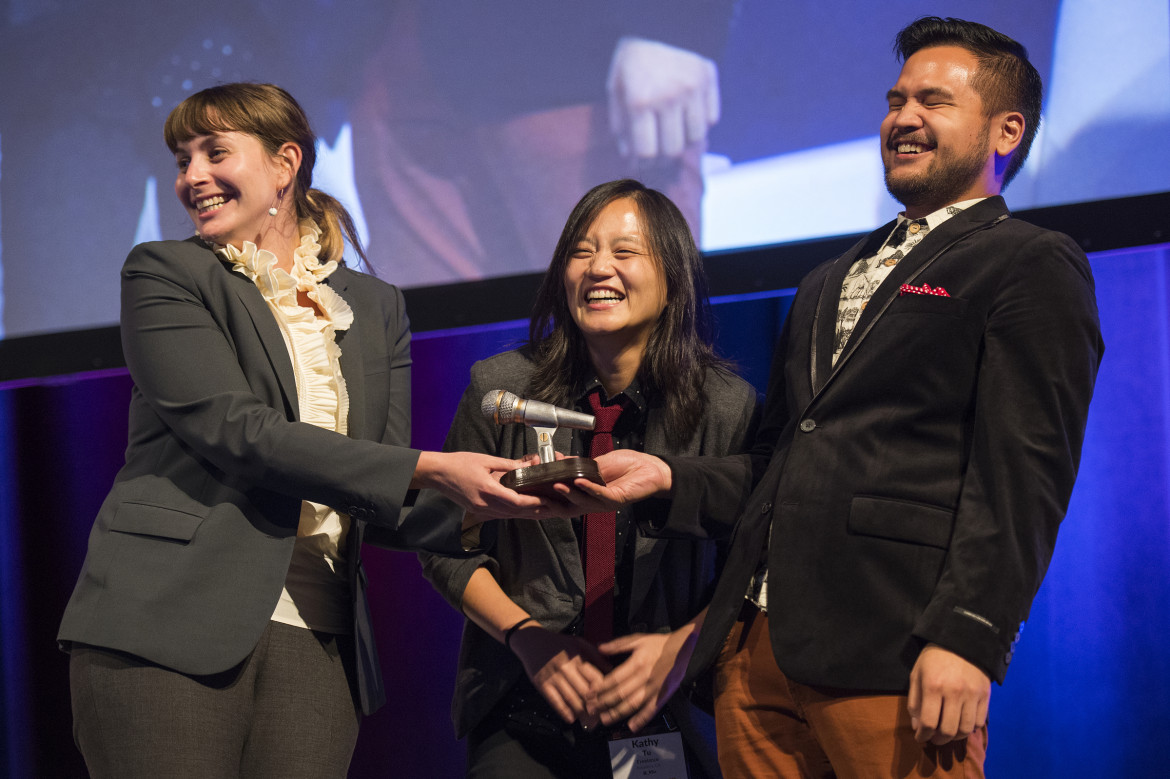 The would-be producers of The City and Gaydio, the winners of WNYC’s Podcast Accelerator contest, will now have the opportunity to pilot their podcasts for the major public radio station and premier podcasting house.

Unlike the internal competition that ultimately spawned WNYC’s Death, Sex & Money podcast last year, this contest was open to talent outside of the station. Producers submitted applications over the summer, and five finalists got to pitch their ideas onstage Friday at the 2015 Online News Association conference in Los Angeles.

Gaydio producer/hosts Kathy Tu and Tobin Low described their show as “exactly what it sounds like” — a lighthearted biweekly magazine show about LGBTQ issues, with each episode based on a theme.

The City producer/host Robin Amer said her investigative series about “the conflicts that drive every city” would be divided into seasons, each consisting of a single story from an American metropolis. “If The Wire or Treme were a podcast and all the stories were true, this is what you’d get,” she said.

The judges — WNYC’s Dean Cappello, chief content officer, and Emily Botein, co-v.p. for on-demand content, along with Glynn Washington, executive producer and host of Snap Judgment — surprised both the crowd and the finalists by picking two winners instead of one.

The selection process started with 370 applicants, said Paula Szuchman, WNYC’s other co-v.p. for on-demand content. While the five finalists all pitched narrative nonfiction shows, “there were also interview shows pitched, there were lots of comedians [who] were pitching shows,” she said.

A large group of editorial employees at WNYC’s shows and in its newsroom helped winnow the field of applicants to 25. A roundtable of producers and members of the station’s underwriting team decided on the final five.

As finalists developed their live pitches, WNYC paired each with a senior editorial employee to serve as a mentor.

“It was really a labor of love,” Szuchman said. “[Friday] night, I was getting texts from the mentors who were back at the station. They were all watching the live stream. They got pizza, they got wine, and they were rooting for their [mentees].”

In the future, Szuchman said, she hopes to hold similar contests scheduled around events at other conferences or festivals beyond ONA, such as the Fringe Festival, where applicants from non-journalistic backgrounds might be spurred to participate.

Each finalist had five minutes to pitch an idea with a multimedia presentation. All blended straight-ahead pitching with live performance of what the show would sound like.

Everything went smoothly for first presenter Katie Herzog, a Seattle-based journalist who is best known in public media as creator of the Babes of NPR tumblr. Her pitch was for Twindex, a show co-hosted with her twin sister Betsy about twins and what their relationships reveal about broader nature-versus-nurture issues.

“Even though we’re twins, we’re really different,” Herzog said. “When we were kids, my sister was sweet and girly, and she didn’t spend her time decapitating Barbie Dolls. I scowled a lot and had a pet stick.”

The judges, who asked one or two questions of each finalist, asked whether the highly focused idea could sustain a whole series. But other than that, Herzog’s polished and funny presentation went off without a hitch, with all of her recorded sound firing perfectly on cue. Not so with the next presenter.

New York City–based videographer Michael Tapp pitched En Route, a show developed with Emily Hsiao. “Each season of En Route will encompass one mail carrier’s route, and each episode will dive into a local story along that route,” Tapp said.

However, as he tried to fire sound from his laptop, Tapp was unable to maintain a connection with the PA, despite a technical run-through that morning. Judges watched from the front row as a venue employee tried to help, and Tapp eventually recovered after several false starts.

Szuchman, who spoke to Tapp afterward, said she told him, “I know it was really upsetting to you, but I kind of think it worked out to your advantage in the end, because you kind of won the crowd over and everyone was rooting for you.”

Amer, who was up next, had the advantage of being aware that things might go wrong. When her first actuality didn’t fire, she asked to restart her presentation, delivering a tongue-in-cheek reread of her opening paragraph that took on a new meaning: “Have you ever had a completely normal day go totally sideways in an instant?” she said, to much laughter.

Her pitch for The City was essentially the opening scene of her planned pilot: a story about a cloud of oily black dust from a petroleum coke storage facility that coated a neighborhood on the south side of Chicago, the city where Amer (a veteran of WBEZ) is based.

“Just as The Wire went deep into the drug wars of Baltimore, season one of the The City would dive into these environmental battles raging in the Rust Belt,” she said.

Based on their questions, the judges’ only reservation about Amer’s pitch was that it was too general and could potentially be stretched to encompass a wide array of news stories.

All technical issues were resolved by the time Slovak radio reporter Katarína Richterová pitched her show Take Me to Your Leader, which would feature the stories of “five people, living in different countries in the world who are mad about this one thing, and have said to themselves, ‘enough,’ ” Richterová said.

The show would chronicle the struggles of real people to bring their disputes to the highest authorities in their countries. Her demo story was about Vít Jedlička, a Czech activist who in April proclaimed a sovereign micronation on the banks of the Danube River in protest of Croatia and Serbia’s border dispute in the area.

Lastly, Tu and Low gave a funny and tightly produced demonstration of Gaydio, which would feature banter between the two gay Asian hosts — “Gaysians, as we say,” Low quipped — as well as “The Coming Out Inbox,” a recurring segment in which LGBTQ people leave voicemails about their coming-out stories.

Each episode would also dig into a main topic through sound-rich reported pieces on such topics as violence against transgender women of color, or Tu’s own story about her relationship with her first-generation Taiwanese immigrant mother who can’t understand her daughter’s sexuality.

The judges were visibly charmed by Tu and Low and asked only if the producers could speak more about themselves.

The three judges deliberated backstage for about 40 minutes, factoring in audience feedback in the form of tweets using the hashtag #ONA15wnyc. Meanwhile, Death, Sex & Money host Anna Sale — the evening’s MC — moderated a lively panel discussion with WNYC podcasters about their craft.

After re-emerging, Cappello joked that the judges “were no longer talking to each other,” indicating that deliberations had been contentious.

When the drumroll started, Washington reached into his pocket and pulled out two slips. “We couldn’t make a decision,” he said.

Both Amer and the team of Tu and Low will receive production assistance — though no cash — to create pilot episodes of their shows. WNYC had originally budgeted $10,000 to fund the prize. Szuchman said she’s not sure whether the two shows will have to split that amount or whether the overall budget will be increased.

“We’re not going to skimp. We’re going to do what it takes to make these amazing,” Szuchman said. “Our dream is that these will turn into WNYC shows, so it’s in our interest to make something great.”

Correction: An earlier version of this story misstated the source of the oily dust that affected the neighborhood featured in the pitch for The City.