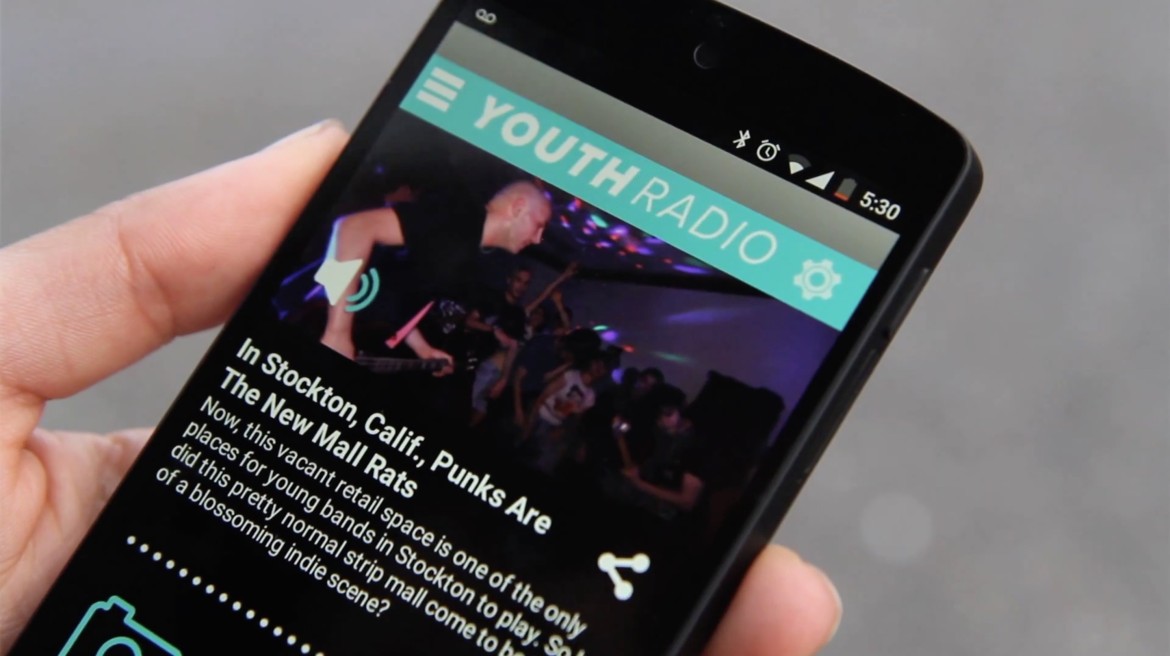 The Youth Radio App encourages users to interact with content, such as this story about Stockton, Calif. teens using a strip mall as a concert venue. (Photo: Youth Radio)

Youth Radio’s first app for showcasing long-form reporting, designed and developed in collaboration with an MIT program, is now available for Android phones on the Google Play store.

The app stemmed from Youth Radio Interactive, an initiative of the Oakland, Calif., media center that teaches young people to combine programming and journalism. Users of the Youth Radio app respond to polls and post photos in response to stories. Youth Radio then compiles the user-submitted data to create infographics and other content for the app.

“One vision for the app is not just delivering stories but collecting people’s stories,” said Asha Richardson, manager of Youth Radio Interactive. “We wanted to add something so users put themselves in the story and the audience becomes a participant.”

One of the app’s first stories reported on teen bands in Stockton, Calif., that are using a strip mall as a venue for punk shows because they have nowhere else to play. The app prompted users to send pictures of unused spaces in their communities that could host concerts. Another story, about California’s drought, asked whether users have changed their water habits.

News outlets including NPR, National Geographic and KQED in San Francisco have featured Youth Radio’s content, and the organization has also started a channel on the personal publishing site Medium. But the new app, which was finished in June, allows Youth Radio to share content with audiences more directly.

By inviting app users to share stories, Youth Radio hopes to bring in new voices, one element of a larger plan to create a national youth-news network, according to Richardson.

Youth Radio partnered on developing the app with MIT App Inventor, a free service that gives users tools to create mobile Android apps. The collaboration was supported by a $1.7 million National Science Foundation grant to Youth Radio for multiple projects over a three-year period.

Young people at Youth Radio brainstormed ideas for the app and designed its user interface, and App Inventor provided the tools for creating the app and advised the young programmers on how to use them.

“It’s not just enough for youths to be creating content, but also platforms for sharing content,” Richardson said. “I love that we made this happen, but I also love that we exposed young people to these opportunities and demystified what it means to be a programmer or a designer.”

“It’s a really nice partnership,” said Andrew McKinney, App Inventor’s director of software development. “[Youth Radio] identified functions and features they’d really like, and we helped build them. In turn, we give those back to [App Inventor’s] general population.”

The app’s development involved young people at both Youth Radio and MIT with collaboration, often in hands-on ways. App Inventor employs just three full-time developers but takes advantage of its location at MIT to use talented student programmers. Two such students traveled across the country to advise Youth Radio’s young programmers.

“What a great opportunity,” McKinney said. “It’s really neat that young kids [at Youth Radio] and young kids at MIT get together and talk and collaborate. The synergy between them and the opportunity for all of them has been just amazing to watch.” 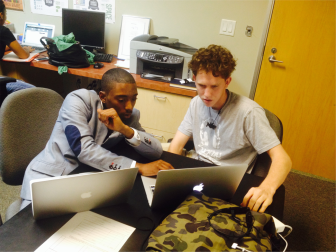 Donta Jackson, a college student who joined Youth Radio as a high school intern, said working on the project added to the professional skills he’s been learning at Youth Radio. “You have to worry about things like design and coding, but also marketing, user research and everything in between,” Jackson said. “You don’t just worry about one piece.”

“I wanted [the app] to showcase stories young people produce, and that’s exactly what it does,” Jackson said. “For people who don’t know what we do, it was an opportunity for them to see it.”

The app took about a year to make, from the original idea to its release in the Google Play store. Youth Radio ran into some challenges along the way, including the need for new components to allow users to submit pictures, and slow functionality due to the high quality of the audio originally prepared for NPR. That required Youth Radio to reduce the file sizes of its app-based stories.

“There have been some hard days where it just broke, but that’s app development,” Richardson said.

The app now features about 10 stories with a focus on health and environment issues. Richardson said additional stories will be featured as downloads increase. According to Google Play store figures, the app has been installed between 50 and 100 times.

Youth Radio hopes to eventually update the app with new content weekly, perhaps drawing from its archives to do so, as it looks to incorporate its creation into daily operations.

Youth Radio has begun exploring how to develop the app for other platforms, including iOS, according to Richardson. App Inventor, which originally began at Google, is also considering expanding to platforms beyond Android, said McKinney.

App Inventor will collaborate with Youth Radio on future projects, according to McKinney. The partners are already considering ideas for a second app.

“I’ve been at MIT for a long time, and I’ve done a lot of cutting-edge projects, but my passion is to figure out how to use technology to support teaching and learning,” McKinney said. “Our collaboration with Youth Radio is a great example of that.”