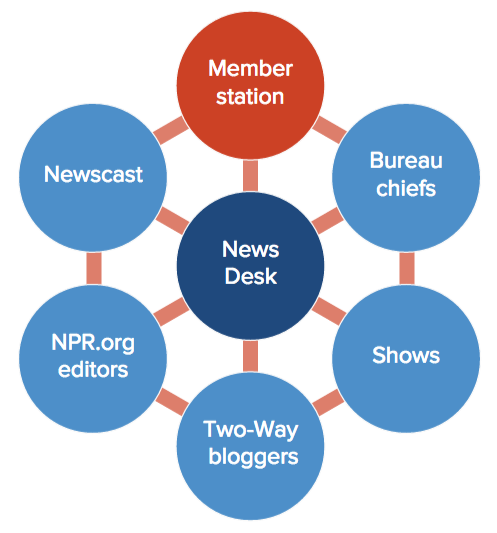 Last month in a hotel ballroom in Salt Lake City, I saw something I never expected to see in my public media career: NPR’s new head of news standing before a roomful of member station news directors, apologizing.

“For every time that an NPR producer or editor has sent an NPR staffer into your territory without so much as a text message,” Michael Oreskes told the Public Radio News Directors, Inc. (PRNDI) conference, “I apologize.

“For every time an NPR producer or editor put a story from your newsroom through the tortures of the damned before putting it on a national show, and then never explained why, I apologize.

“For every time an NPR producer or editor has rejected your story pitch, only to air the same story three weeks later, after it had been in the New York Times, I humbly apologize.”

His comments brought down the house.

Oreskes had tapped into the long-held resentments of station-based journalists who have been ignored, talked down to, avoided, circumvented and generally disrespected by some at NPR over the years.

In 2003, my colleague Mike Marcotte perfectly characterized the relationship as it existed when he was news director at KPBS in San Diego: “You ridicule our news people as pathetic rookies,” he wrote in Current.  “We trash your editors as arrogant idiots.”

To be fair, Mike says he was being intentionally “cheeky,” and the comment was part of an article praising NPR’s bureau chief system for trying to bridge that divide. But he tapped into real sentiment.

All that to say, Oreskes was wise to clear the air before launching into a heady speech about the network’s year-old collaborative coverage project and its vision of a true network of NPR and station journalists.

The relationship between the two sides has been evolving, though often at a glacial pace, since the creation of those regional bureau chief positions back in 1999. It’s been a largely transactional relationship — station reporters pitch and produce stories for NPR just like freelancers do.

But the past few years have seen tentative experiments with more genuinely collaborative models. I can speak personally to a couple of examples.

When I was news director at WMFE in Orlando, Fla., our newsroom had developed significant expertise covering the space shuttle program and its importance to our region’s economy and culture. So in 2011, during the run-up to the final shuttle launch, NPR’s Southern Bureau chief Russell Lewis brought me in at the beginning of NPR’s coverage planning.

Together, we produced a wealth of preview stories and two separate live coverage streams (I was happy to be part of NPR’s live coverage during the launch itself).

I was able to integrate WMFE’s local coverage seamlessly with the network’s, without duplication, hurt feelings or anything that would require an apology. I think we served the local and national audience better by working together.

In July 2012, I led Colorado Public Radio’s coverage of the Aurora theater shooting. It was a terrible few days, but another good experience with NPR.

Through the efforts of NPR’s Western Bureau chief, Jason DeRose, I was immediately included in the network’s communication chain. The day of the shooting, a CPR reporter was NPR’s voice on the story all through Morning Edition.

Because I was in the loop, I was able to make him available to Morning Edition, even while juggling his work for our local newscasts and talk show.  When NPR staff arrived on the scene, far from being intruders, they were a welcome relief squad.

Scores of similar experiences played out around the country over the last several years, largely out of necessity. Lots of news was breaking, while NPR was cutting its own staff.

Those experiences built trust on both sides. NPR started to realize that maybe station-based journalists weren’t pathetic rookies after all; station journalists stopped seeing NPR editors as nothing more than arrogant idiots.

This new feeling of trust was aided by more formal collaborative projects, such as Kaiser Health News and StateImpact. And then early last year, NPR launched its collaborative coverage project to formalize these experiments into a new kind of relationship. Five station leaders — two general managers and three news directors — serve on the project’s steering committee, and it’s starting to show results.

For one thing, NPR has hired a new Collaborative Coverage Editor, Bruce Auster. At the PRNDI conference, he unveiled a new set of very specific procedures for NPR–station communication during breaking news, planned for implementation later this summer.

His presentation included a diagram depicting member stations as equal partners with other NPR units, orbiting around the recently-created NPR News Desk. It was a powerful image for those of us who remember when some people at NPR didn’t consider stations to be in the same galaxy, much less the same orbit.

Despite all these optimistic signs, I can see plenty of challenges ahead.

Last month, Collaborative Coverage team member and West Virginia Public Broadcasting CEO Scott Finn wrote a commentary laying out what he sees as five next steps. I agree with every one of them.

From my outside perspective, I’ll add four more items to the to-do list:

Build trust in station editors, as well as reporters.

Despite the truly remarkable progress that’s been made over the past few years, there remains a trust gap between NPR and stations.

There are plenty of station journalists — not just reporters, but editors, too — who are every bit as qualified and talented as their network counterparts; but NPR, understandably, will not trust them unless they’ve been thoroughly vetted.

Given the severe lack of editorial capacity across the public media system, it’s crucial to bring editors into the collaborative coverage mix; but that will require even more trust building, since editors are the final gatekeepers of our journalism.

Right now, there’s no mechanism for identifying and cultivating talented editors outside of NPR. One option is, reporters and editors could apply to become part of a collaborative coverage “pool” of station-based journalists. Applicants could be independently evaluated and could receive training if needed before getting the stamp of approval.

It’s similar to what happens now with reporters for Kaiser Health News, Auster’s “Back at Base” project and a new NPR–station team being put together to cover the 2016 elections.

Judging by some informal post-PRNDI conversations, I think there could be support for something like this among NPR leaders — but it will likely take additional funding to carry out the necessary evaluations and vetting.

This may be the biggest elephant in the room.

The collaborative coverage project aims to move the NPR–station relationship from a transactional to a collaborative one. If station reporters no longer pitch and produce for NPR as freelancers do, will NPR stop paying them as it pays freelancers?

Many stations use NPR’s freelance payments to supplement the salaries of underpaid, over-performing reporters. Even station reporters paid well by their employers consider NPR payments to be part of their overall intake, and understandably so. Upending that deal will be controversial to say the least.

I know for a fact that the committee is not ignoring this issue — it’s just not ready to talk about it yet. It’s not a bad idea to rack up some successes before tackling this thorny question publicly, but it is a conversation that needs to happen.

Hire someone with station experience to help the collaborative coverage team.

NPR is to be commended for bringing in five respected station leaders, many of them journalists, to serve as volunteers on the collaborative coverage committee. It will soon need additional paid staff with member station experience as well.

The committee members can’t be expected to volunteer their time forever. As the project moves further into the operational realm, it will need to hire folks with deep station knowledge.

One of the most remarkable things about the collaborative coverage project is that it started with journalists. So many news-related initiatives start at the upper management level, and by the time they trickle down to newsrooms, they’re riddled with problems created by extremely well-intentioned people who have no idea how the news “sausage” is made. I’m so pleased that the collaborative coverage project is happening the right way around.

That said, it may be time to involve top brass more deeply in the conversation.

While many station managers, g.m.’s, and c.e.o.’s consider NPR a partner, others view the network much more darkly — as a greedy, monopolistic vendor or even as a direct competitor. (Here’s another dynamic whose navigation would benefit from a project hire with station experience.)

These managers may wonder why they should contribute their staff’s time or their newsroom’s resources to a collaborative effort. Before too long, a parallel process should be launched to consider how to lobby and perhaps incentivize stations to be a part of this grand network vision.

It’s evident from this to-do list that I’m not wearing rose-colored glasses, and neither is anyone on the collaborative committee — they know most of the hard work is yet to come.

But as I listened to Michael Oreskes and other NPR leaders talk about working with stations as true partners, as I saw them networking with station news directors throughout the PRNDI conference, I got a good gut feeling. I think these guys really do respect us now. Finally.

Maybe this is naive — and it’s hard for a journalist to admit something like this — but when Auster showed that diagram with the member stations orbiting around the NPR News Desk, I even got a few goosebumps.

Judith Smelser is the founder of Smelser Editing & Consulting, which provides consulting, training and independent story editing for public media newsrooms around the country. She also writes Scribbles and Scruples, a blog about issues in public media and the craft of journalism. Smelser is a former managing editor at Colorado Public Radio and former news director at WMFE in Orlando, Fla.