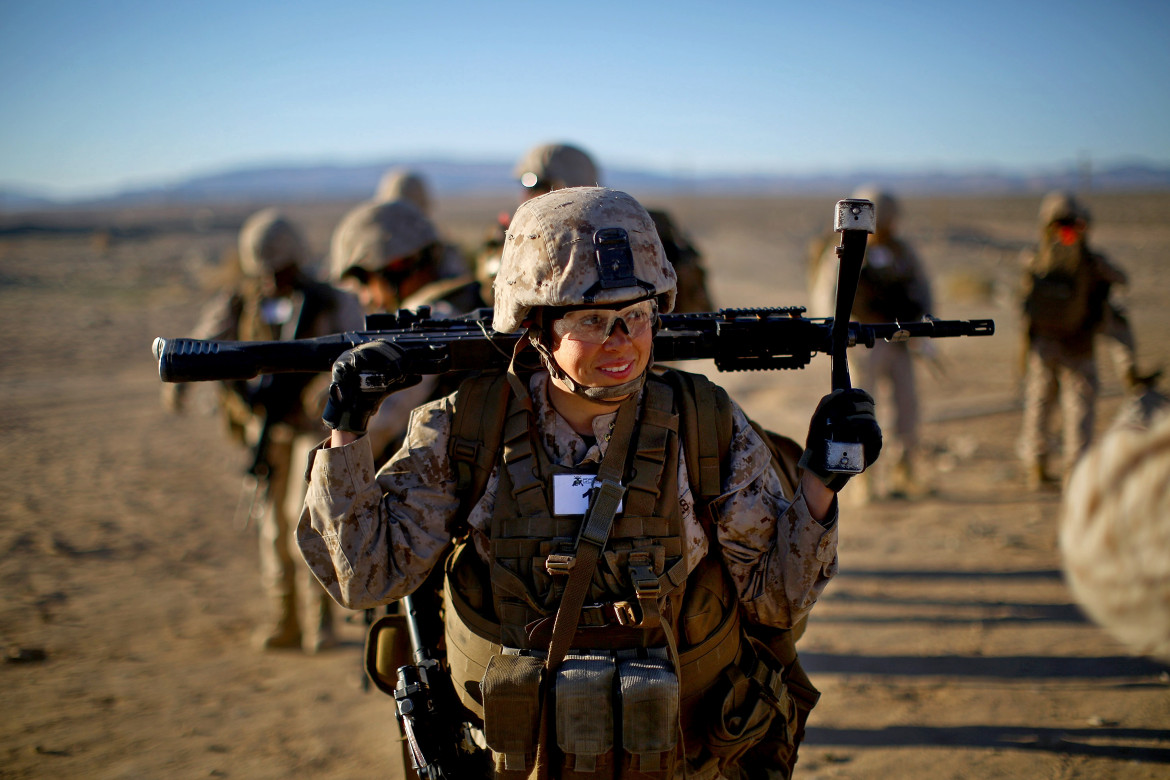 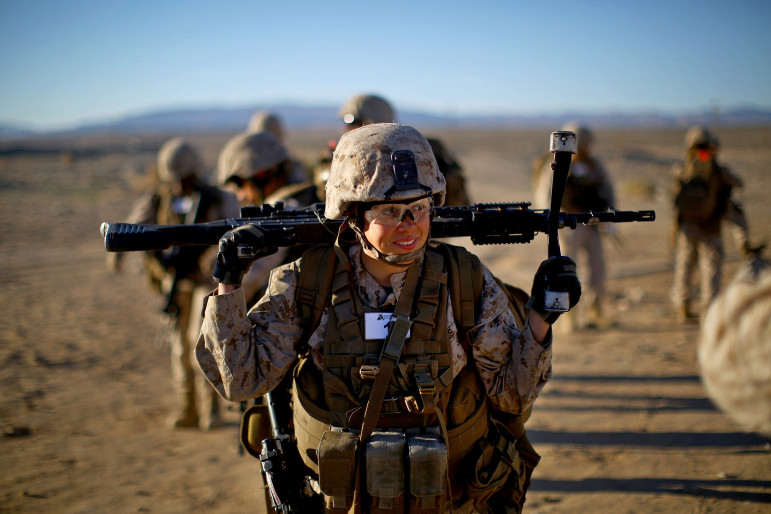 Sgt. Courtney White carries her machine gun before a live-fire exercise. NPR’s coverage of combat-readiness training for female Marines was featured on Back at Base, a series produced through an editorial collaboration between journalists at NPR and local stations. (Photo: David Gilkey/NPR)

I’ve been in public media for several years, and yet this finding from a recent survey shocked me: Public radio employs more than 1,800 journalists in 200-plus newsrooms across America.

By comparison, the New York Times employs about 1,300 journalists, at last count. The Washington Post has fewer than 700. Buzzfeed, fewer than 300.

We have a larger number of journalists than the Times, but are we having as much of an impact as the Gray Lady? As much as we’ve accomplished lately, I’d still have to say, “No, not yet.”

How do we unleash the true potential of public media journalism? That’s the core mission for NPR’s collaborative coverage project. For more than a year, I’ve joined other news professionals at stations and NPR to wrangle with this mission: To transform NPR and member-station newsrooms into a true network that can move faster, dig deeper and reflect the fabric of America.

For an old journalist like me, “collaboration” sounds wishy-washy and Kumbaya-ish. Nice, sure, but is it necessary?

From my work on the committee and my own experience with initiatives such as StateImpact Florida, I’ve learned that the hard work of editorial collaboration pays off. It produces great journalism while training our reporters to go on to deliver more high-impact reporting.

Over the last 16 months, the project has conducted a lot of research, including the survey that came up with the number of 1,800-plus public radio journalists.

We’ve also been talking with news professionals within and outside the public radio system. For example, Jim Schachter, news v.p. at New York’s WNYC, and Russell Lewis, NPR Southern Bureau chief, spoke with leadership at Gannett about how they coordinate and collaborate on everything from breaking news to enterprise reporting.

Though this project started under different leadership at NPR, new President Jarl Mohn and new Senior Vice President of News Mike Oreskes have been enthusiastic about our work to increase NPR’s collaborations with member stations.

They are scheduled to speak during this month’s Public Radio News Directors conference in Salt Lake City along with several additional members of the committee. I can’t make it, so I asked the group if I could write about some of the things I’ve learned in this process.

This commentary isn’t intended an official report from the project. Consider it a snapshot, taken from my point of view.

The committee still has a lot of work to do, but as we explore how to harness public radio’s newsgathering to fulfill the mission laid out for the collaborative coverage project, we are starting to see some patterns emerge. As a station manager and former news director, I see five ways that public radio could empower its journalists to move forward collaboratively.

There’s been a huge increase in journalists at the station level. Meanwhile, NPR still has the same number of regional editors it had 15 years ago: four.

Stations aren’t hiring enough editors to keep up, either. The shortage of skilled editors leads to backlogs of pitches and missed opportunities to take local stories to a national audience — on radio and online.

To deal with this, we need to increase the prestige, compensation and visibility of editors in the system.

Another possibility: Stations already share reporting talent with NPR. Could they share editing talent as well? Could station editors serve as backup when a regional editor is overwhelmed, on leave or on another assignment?

Finally, we should replicate other models that combine NPR editors and local journalists, such as Kaiser Health News, NPR Ed, and Back At Base. The characteristic that distinguishes these editorial collaborations from others is the way they pair national and local journalists. In each case, national-level editors work directly with station-based reporters on an ongoing basis to cover a topical beat. This arrangement provides training and mentorship, builds trust among contributors and develops beat expertise.

Bruce Auster was editing NPR’s national security coverage when he volunteered to edit a series called Back At Base, a collaborative editorial project that chronicles the lives of our troops where they live.

This series was developed as a demonstration of how editorial collaborations can work, and the committee recommended that NPR should invite station-based reporters to join the team. Rather than recruiting stations to participate, NPR put out a call for all interested stations to submit applications.

Since last November, NPR has worked with seven station reporters to produce 29 stories. They’ve been great stories, too, the kind that stay on your mind — from reports on the evacuation of children from Saigon to questionable disparities in veterans’ benefits based on where they live.

Auster was so changed by that experience that he sought — and got — a job as NPR’s new collaborative coverage editor.

We need more of our best journalists to strive to become mentors to others as Auster has done, either formally or informally.

A single journalist working alone can only do so much. If we develop a team of station and NPR journalists working together, we could do so much more.

When I became a station reporter in West Virginia, the whole NPR thing seemed to be a mystery.

How can I learn to be a better reporter? How do I pitch a story to a national show? And what about the digital side of everything — how does that work?

I was fortunate to receive a visit from our bureau chief, Russell Lewis, who gave me some valuable advice.

Still, way too much about the system for pitching local stories to NPR is unexplained. With a little bit of honest communication, we may be able to avoid confusion that leads to hard feelings and missed opportunities.

For example, when a big story breaks in your community, what’s the role of your local station? NPR? What if there is more than one station serving the affected area?

One idea from the collaboration project is to have these conversations about who does what before the news breaks. There could even be some sort of compact between stations and NPR that helps clarify expectations on all sides. (My colleagues will be exploring these ideas with attendees at PRNDI.)

Here’s one more idea for making the implicit explicit: Let’s be honest about which reporters are ready for national exposure — and which are not.

When I was a news director, I was guilty of pushing a “not-ready-for-primetime” reporter onto the national stage. It wasn’t fair to that reporter, the NPR editor or the audience.

Sometimes, a pitch from one of these reporters enters a no man’s land and is never heard from again. I believe it would be better to tell the reporter upfront, “I’m sorry, but you’re not ready yet. Here’s what you need to work on.”

4. Increase diversity by working together

And yet every year NPR must turn away dozens of talented, qualified young people — including many young people of color — just because it can’t take everyone.

Meanwhile, I know dozens of stations that would love to work with those young people and could give them an awesome experience from within their own newsrooms. Could we develop a national system for sharing internship applications?

And that’s just the start. How about expanding our joint efforts to hire minority journalists? And could we take some of the great research NPR has done around diversity in sourcing and bring it to the station level, too?

5. Make collaboration our daily work, not a special effort

What if every time a group of journalists and editors at NPR thought up a new series, they asked themselves, “How can we collaborate with station journalists to make this better?”

And what if the same thing happened at the station level? What if we automatically reached out to other stations, to NPR and to other public radio organizations?

Yes, it takes more time and more work. And not every project is meant for collaboration. But we are not going to truly unleash our potential if we keep treating collaboration as something we only do if we have the time, the will and the money.

If we start working together as a matter of course, then our 1,800-plus journalists will begin acting as if they work within a true network. We’ll break more news and expand the power of our investigations.

And we’ll begin giving the journalists at the New York Times and Washington Post some real heartburn. I can’t wait.