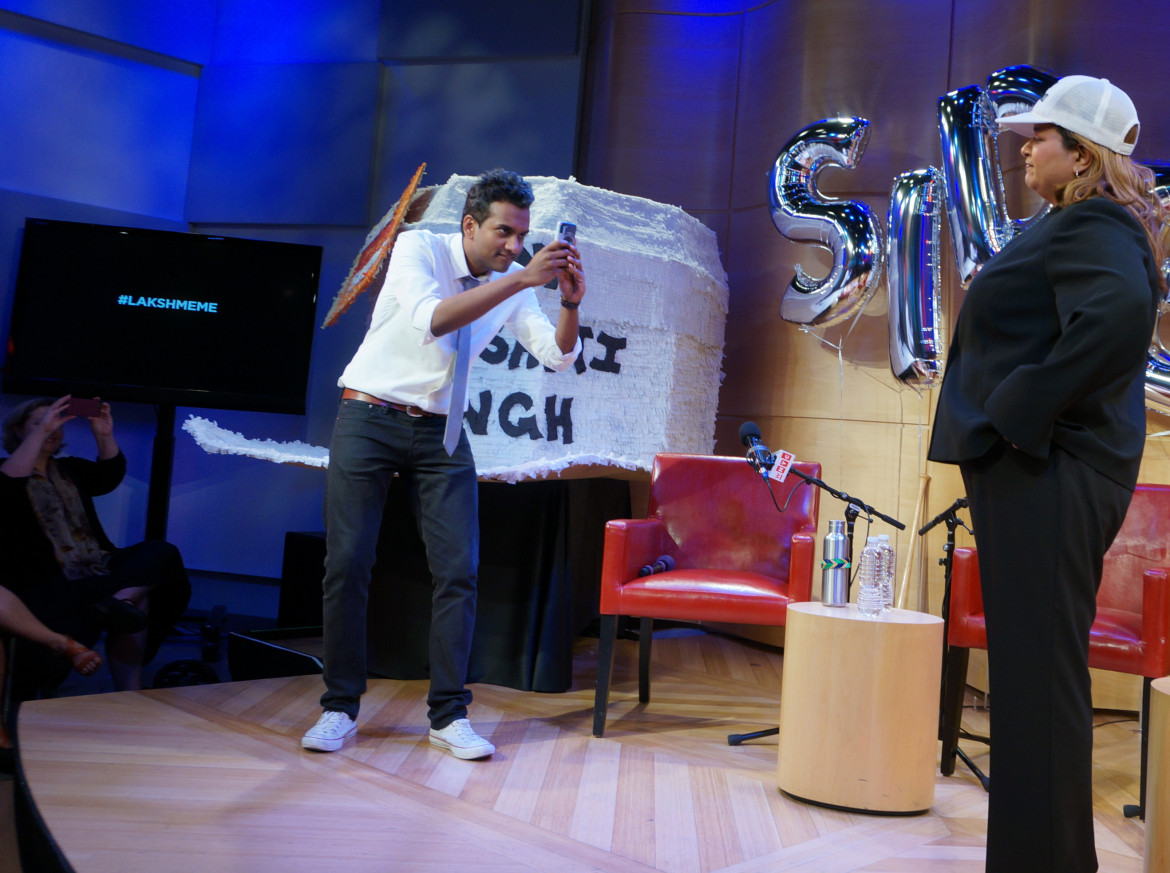 Sean Rameswaram, left, completes his quest to photograph Singh wearing the hat that he turned into an Internet meme. (Photo: Jon Kalish) 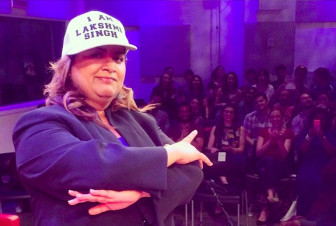 After a five-month social media campaign featuring photographs of public radio celebs and common folk wearing a white trucker’s hat emblazoned with the words “I AM LAKSHMI SINGH,” the NPR newscaster donned one to wild cheers during a standing-room–only event at WNYC in New York City Tuesday evening.

Sean Rameswaram, a Studio 360 producer and podcast host who was responsible for what became a bona fide Internet meme, hosted the event, which mixed whimsy and seriousness to explore issues of diversity in public radio.

After Singh put on the hat, Rameswaram used his smartphone camera to capture the moment and promptly post a photo to his Instagram account. Dressed in a conservative blue pantsuit, Singh crossed her arms in Rameswaram’s direction, exuding as much attitude as you could expect of an NPR newscaster.

She wore the hat for 23 seconds, then took it off as she sat down. Again at Rameswaram’s prodding, she proclaimed, “I’m Lakshmi Singh.” The audience in WNYC’s Greene Space cheered appreciatively. 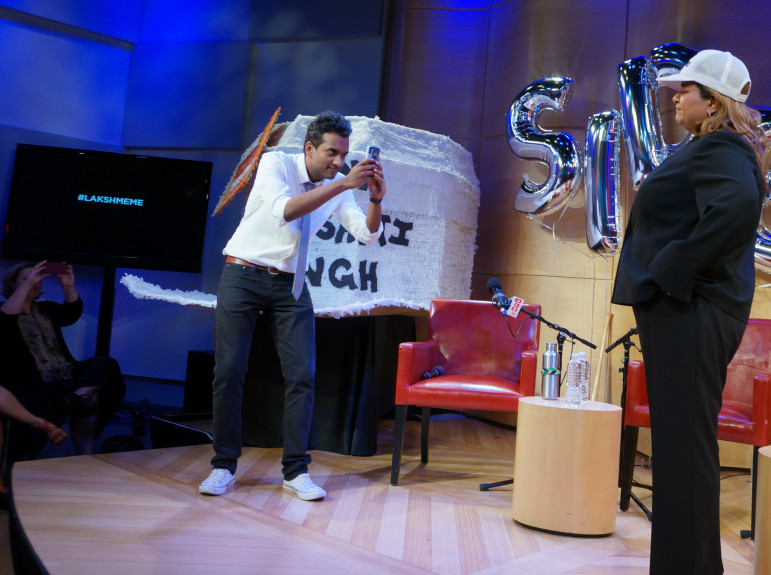 Sean Rameswaram, left, completes his quest to photograph NPR newscaster Lakshmi Singh in the hat that he turned into an Internet meme. (Photo: Jon Kalish)

Hundreds of people have tweeted images of the hat, and the social-media campaign garnered thousands of likes on Facebook, Tumblr, Instagram and Twitter, Rameswaram told the audience. Singh’s South Asian name, and her rise as an NPR newscaster, provided inspiration for his own career.

“Hearing her every day on the radio made me feel like I had a place in public radio,” Rameswaram told Current. “I didn’t need her to be a very Indian person. She isn’t. I just needed her to be around. I needed to hear a name like that.”

Rameswaram’s family is originally from Sri Lanka. He grew up in Toronto and California, hosting local broadcasts of All Things Considered at KUSP in Santa Cruz, Calif., before moving to New York City to work at WNYC.

Singh, a 15-year NPR veteran, became an improbable social-media phenomenon at Rameswaram’s initiative in December. She told the audience that she is the biracial daughter of a Puerto Rican mother and a father of Indo-Trinidadian descent. Singh seemed surprised to see an image of her father in a WNYC-produced video about the hat campaign.

Chatting with Rameswaram about her career on what looked like a late-night TV talk show set, Singh mentioned that early in her career she had been advised — and she considered — the idea of adopting an Americanized name. But her father said “Nothing doing” and reminded her that he had paid her college tuition. Still, Singh has heard from NPR listeners of South Asian descent who want her to correct her pronunciation of her first name, which is derived from that of a Hindu goddess. But Singh said she refuses to use the Luck-shmee pronunciation, opting for Lack-shmee.

The focus on exotic-sounding names inspired a spelling bee quizzing contestants Ophira Eisenberg of Ask Me Another, Zoe Chace of This American Life and Mike Pesca of Slate’s The Gist podcast and others on the names of other public radio hosts and reporters. They struggled to spell out Soraya Sarhaddi Nelson, Don Gonyea, Yuki Noguchi and Mandalit del Barco. Brooke Gladstone of On the Media won after the last standing competitor, Dan Pashman, host of WNYC’s The Sporkful podcast, fudged the spelling of Africa-based correspondent Ofeibea Quist-Arcton’s first name.

A biracial folk duo billed as The Lakshmi Singers performed humorous original songs with soulful, upbeat harmonies. Then Singh used a baseball bat to bust open a huge pinata shaped in the form of the “I AM LAKSHMI SINGH” hat to release balloons and dozens of the Internet-memed hats, which were promptly tossed into an eager audience. 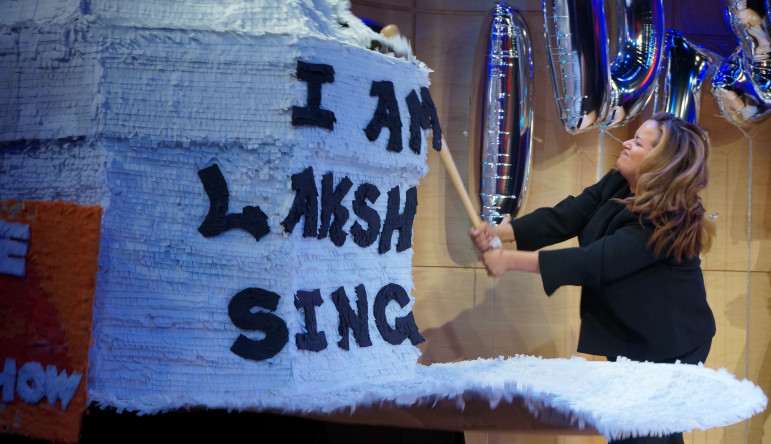 Singh takes a swing at the hat-shaped pinata that was filled with balloons and more hats. (Photo: Jon Kalish)

The frivolity was mixed with some serious soul-searching. In a discussion moderated by Rameswaram, panelists considered the challenges of diversifying pubradio’s listenership. Chenjerai Kumanyika, an assistant professor at Clemson University whose Vocal Color In Public Radio manifesto grew out of a Transom Traveling Workshop, joined This American Life producer Stephanie Foo on the panel.

Foo, who toiled for Snap Judgment before joining TAL, warned of the competitive threat that public radio faces from podcasting, asserting that “people don’t really own radios any more.”

“We need to focus very deeply on young people, because if we’re not bringing them into the fold and really listening to them,” including putting them into high-profile positions as hosts, “young people are just going to turn to podcasts and you will become irrelevant,” she warned.

Singh, who is 43, described a trend in broadcasting that she finds troubling: Older, experienced journalists are often deemed “too old” or “too expensive” — in short, they are seen as liabilities. But their experience in newsgathering, Singh said, is valuable.

“A greater emphasis has to be placed on a person’s experience and the richness that experience brings to a story,” she told Current.

After listening to Foo complain that public radio is too old and too white, Singh said that she has an informal co-mentoring relationship with a 24-year-old woman at NPR. Singh declined to name the young woman other than to say she’s involved in the digital side of NPR’s news division.

“We consult each other,” said Singh. “She’s my tutor. There was a lot I didn’t understand about online reporting. There are now these kinds of partnerships, alliances taking place [at NPR].”

Correction: An earlier version of this post incorrectly identified Rameswaram as a producer and podcast host at WNYC. He works on Studio 360 and its Sideshow podcast, which are produced at WNYC under an agreement with Public Radio International, owner of both properties.