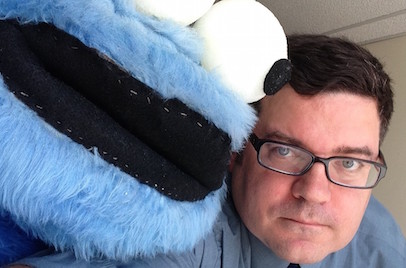 Finn and a friend at WVPB’s headquarters.

When I heard about the Punch Sulzberger Program at Columbia University, my first thought was, “That’s a losing battle.” That’s because the goal of the program is to teach reporter-types like me business-type skills.

Here’s how the Sulzberger Program describes itself: “The program immerses high-ranking news media executives in the use of strategy, innovation, marketing, demographics, journalism values and other critical approaches to help resolve challenges confronting their organizations.”

My second thought was, “Even if it works, it’s not for me.” I wasn’t feeling like a “high-ranking news media executive,” but was the relatively new leader of West Virginia Public Broadcasting.

And it’s true, the Sulzberger Program is chock-full of folks from big media companies, including the New York Times, The Associated Press, ABC News and ESPN.

But I was desperate for help in figuring out this new media landscape — even more so now that one of the most important things to happen to public radio this decade, Serial, never actually aired on any public radio station.

So I signed on to Sulzberger. I wasn’t the only public media person there, thank goodness. Gemma Hooley, v.p. for member partnership at NPR, used her fellowship year to begin reshaping the relationship between member stations and the network. Brenda Breslauer, director of programming initiatives for New York’s WNET, designed a system to measure the impact of the station’s programming. And Kerri Hoffman, c.o.o. of PRX, steered us through a refocusing and reorganization of PRX as it copes with phenomenal growth.

We had a lot to share with our commercial-world brothers and sisters. They are starting to copy parts of our model: providing crucial services, leading to audience engagement, which leads to increased funding.

We have a lot to learn from them as well. Public media has been spared many of the ravages our friends in the print and commercial broadcasting worlds have faced. But there are signs that the storm is headed for us:

West Virginia Public Broadcasting is proud of our 27 towers delivering radio and TV to the remotest hollows of our state. But make no mistake — thanks to the digital revolution, we are losing our monopoly as a provider of PBS and NPR programming in our region.

What the Sulzberger program showed me is this: It’s no longer good enough for us to only deliver national and international content. We must be more than just the UPS delivery service for PBS and NPR.

Newspapers lost their monopoly on national and international news years ago. As an industry, they failed to react quickly or forcefully enough. (I should know — I am a refugee from print myself, a former reporter at The Charleston Gazette.)

Now, many of them are reacting, as are legacy commercial broadcasters. They are experimenting in exciting new ways, and if we listen to them, maybe we can avoid some of the pain they’ve experienced. Here are five things I learned from them:

1. We are all tech companies.

Here’s one Sulzberger-ism: “The solutions for your future often lie somewhere in your past.”

Public broadcasting stations began as high-tech media startups. The new technology was radio and TV broadcasting. We pioneered making new types of programs that were both educational and entertaining. Julia Child, Mister Rogers, This American Life, Sesame Street, This Old House — we were the original media innovators. We have spawned entire channels in our image.

Now, we must embrace this new technology, even as we maintain our legacy service. I think the Dallas Morning News can teach us about this. Sulzberger Fellow Nicki Purcell used her experience in marketing at Nokia to help the Dallas Morning News present a unified digital presence. They are relentless in using digital metrics to measure what works and what doesn’t — to the point that they were willing to eliminate several digital products that were underperforming to focus on a smaller number that showed more promise. Under her leadership, their profitability has increased — all while creating world-class reporting on Ebola in their backyard.

Our technology partnership with NPR Digital is paying dividends here in West Virginia. When we ran our own website, our web traffic was flat for three years. Last year, we adopted NPR’s Core Publisher platform. We also attended the Knight Digital Training for stations.

This freed up our web team to focus on great storytelling instead of website maintenance. Our web traffic in 2014 was double the year before — up by approximately 100 percent in pageviews and unique visitors. Most of that growth came from mobile devices.

2. You own only what you make.

OK, here’s the most controversial thing I have to say: Public media stations need to spend more money and energy making their own original programming.

That’s what the nonprofit Center for Investigative Reporting discovered. For decades, they have partnered with other media outlets, such as PBS and CNN, to broadcast their work. Their own brand sometimes got lost in the shuffle.

Now, they are embarking on their own investigative program with PRX, called Reveal. It is available to public radio stations to air, but it also is available as a podcast. Their stories also are available on CIR’s website. Under the leadership of Sulzberger Fellow Christa Scharfenberg, they are experiencing success rebranding CIR’s investigative journalism as Reveal.

That’s why we don’t call ourselves “Your NPR Station” — we say we’re “Telling West Virginia’s Story.” It’s why we changed the name of our main channel from West Virginia PBS to West Virginia Public Broadcasting. We love our relationships with NPR and PBS. We all will be better off as a system if we are a partnership of strong local stations and national networks.

West Virginia Public Broadcasting is investing in original programs, such as Us and Them, a new podcast by Peabody Award–winning producer Trey Kay. Watch for it this spring. The goal is to tell fascinating and true stories about culture warriors — after listening, you’ll have a new appreciation for people on all sides of the battle.

3. People want a relationship, not a product.

ESPN is one of the most commercially successful enterprises in the history of media. So I was shocked when Sulzberger Fellow David Kraft, senior director and managing editor of news operations for ESPN Digital Media, told us their public media–like mission statement: “To serve sports fans wherever sports are watched, listened to, discussed, debated, read about or played.”

Kraft’s another Sulzberger fellow, and he says it’s more than a saying at ESPN’s Bristol headquarters. Editors and reporters actually talk about it all the time — how does this story, this app, serve the fan?

When I arrived at West Virginia Public Broadcasting, we had largely stopped reaching out to our audience. We conducted few public events. We had canceled our newsletter. Were we serving the fans of public media? We had no way of knowing.

For the past two years, we’ve worked hard to re-establish our relationship with our fans. Since then, we’ve made live events and social media a big part of our mission.

Over the past year, our fundraising is up 10 percent, even amid a downturn in the West Virginia coal economy. I think it’s because we are trying to “serve the fan.”

By the way, we might not have aired Serial, but we could have held live listening parties around it. That’s what KPCC in Pasadena, Calif., and other stations did. Smart.

We may be losing our local monopolies, but we’re gaining a new international audience, thanks to our digital presence.

The New York Times realizes this. They sent two leaders to beef up their international offerings — Michael Slackman from editorial, Stephen Dunbar-Johnson from the business side. They’re experimenting by offering the Times in more languages and expanding their reporting power in selected countries. (In the Sulzberger speak, this is called “Design-Do” — trying small experiments, learning from them, tweaking your model, trying again.)

So what does “being everywhere” mean for stations? In our case, it means reaching out to the diaspora of displaced West Virginians around the country and the world.

When I was in Shanghai, I was shocked to hear a table of Chinese businesspeople sing along with “Country Roads,” our unofficial state anthem. Mountaineers are everywhere. I bet many of them would love to listen to our podcast Inside Appalachia. How do I tap into that audience?

5. Deep and simple is best.

This pearl of wisdom originally comes from our own Fred Rogers, but I heard it first through Facebook executive and Sulzberger Fellow Benjamin Wagner. He also happened to produce the documentary Mister Rogers & Me, which is available to public television stations through American Public Television.

Anyway, what it means to me is this: We may feel overwhelmed by all this new technology — just when we’ve mastered Facebook and COVE, we’re expected to know Tumblr and Pinterest.

But really, what people want is what we already make — great stories that educate, inspire and entertain.

We must respond to new audience demands. We must produce our stories so they are available on demand, in the formats people are using.

The Sulzberger Program didn’t just ask us to think about these issues. It required me to create a specific challenge and gave us conceptual tools to meet it. (My challenge was this: “Transform West Virginia Public Broadcasting from a national programming deliverer to an indispensable resource for education, news and public safety, while diversifying our sources of financial support.”)

I have a deep faith that when we do this, we’ll establish new relationships with new audiences. Their love of public media will grow, and they’ll become proud, sustaining members of our public media stations. And our great-grandchildren will be watching, listening to and reading our story on West Virginia Public Broadcasting.

Scott Finn is executive director and c.e.o. of West Virginia Public Broadcasting. He describes himself as a “recovering reporter,” serving stints as news director at WUSF in Tampa, Fla.; news director and reporter for West Virginia Public Broadcasting; and statehouse reporter for the Charleston Gazette.
Correction: An earlier version of this story provided the incorrect title for David Kraft, senior director and managing editor of news operations for ESPN Digital Media.
ShareTweet EmailPrint More