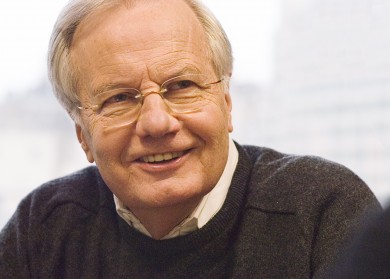 In January 2015 Bill Moyers ends his run on public television, which has aired his public affairs programs and specials since 1971. (Photo by Peter Krogh)

Public television newsman Bill Moyers will retire in January 2015, he said in a Sept. 12 letter to station colleagues, and “this time it’s the real deal.”

Moyers will end his run in January 2015. Public television has aired his public affairs programs and specials since 1971. (Photo: Peter Krogh)

Moyers, 80, has produced and anchored four public-affairs programs and numerous specials on public television dating to 1971. He came out of retirement in 2011 for his most recent weekly series, Moyers & Company. That nearly shuttered last fall until thousands of enthusiastic fans took to social media and demanded that Moyers remain on the air. His funders responded with another year of support.

Moyers said in an email answering questions from Current that this time, he didn’t give the funders a chance to lure him back. “Several were disappointed that we’re not continuing,” he said. “We’ve been partners a long time now, and we became friends over the years. But they believed I meant what I was saying and they understood and every one of them graciously accepted my decision.”

The program is carried on more than 95 percent of public television stations, according to distributor American Public Television (APT), and in all of the Top 25 major markets.

After January, Moyers will focus on closing down Public Affairs Television (PAT), the production company that he and wife Judith Davidson Moyers founded in 1986 when Moyers left CBS News. His wife is also executive editor for Moyers & Company.

Shutting down PAT “will take a while,” Moyers said. “Mostly, Judith and I want to take some deep breaths for a change.”

Saying goodbye to colleagues will be tough, Moyers admitted. The program employs 23 full-time and about 24 independent contractors, including studio crew. “That’s the painful part — all the sad farewells,” he said, adding that “every one of them is talented. Everyone thinks of this as a calling. They’ll be showing up all over the place, doing good work with other kindred spirits.”

Moyers will remain president of the nonprofit Schumann Media Center, which supports and produces independent journalism.

The website billmoyers.com, which contains much of his 43-year archive, also will continue, he said, “at least for the indefinite future.” Judy Doctoroff O’Neill, PAT president and the program’s executive producer, is “determined” to find a permanent spot for the archives, Moyers said.

Moyers & Company marked the first time his program was distributed by APT and not PBS, which had declined to distribute the program. Although he didn’t know the team at APT as well as his colleagues at PBS, Moyers said, “they threw themselves into the collaboration with zest and I am grateful to them for it.”

“Obviously it’s much more difficult to achieve impact when you’re not in common carriage and stations schedule the program at random; that makes it hard to promote each week’s show consistently,” Moyers noted. “And it’s harder when some stations resist public affairs programs in the first place — especially those that report inconvenient truths. But we’ve had a good run and frankly, I’ve been a very lucky man to be doing what I love, with colleagues I cherish, for so long now.”

Cynthia Fenneman, APT president, said in a statement to Current that public television “has been fortunate to have the dedication of Bill Moyers for decades,” and APT was pleased to bring the program to air. APT honored Moyers with its Lifetime Achievement Award in 2011. “We have tremendous appreciation for Bill and his fervent scholarship, integrity and belief in the freedom of speech,” Fenneman said.

Moyers & Company was the first non-PBS show to stream on PBS’s COVE online video platform, and repeats will continue to be available there via APT.

Moyers isn’t planning a special farewell episode. “No, we’ll just keep doing what we always do — offer our take on current affairs right up to the end,” he said.