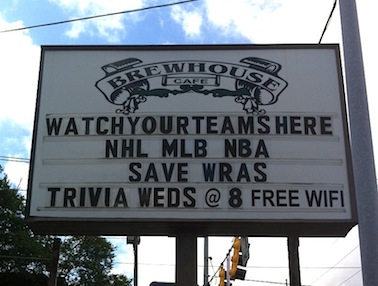 I was a student DJ at WRAS, the college station that is about to be converted to a daytime NPR news/talk format by Georgia Public Broadcasting.

When I spun records there and learned to talk into a mic, the Indigo Girls still played free concerts on the Georgia State University plaza, before their big break. Later I went on to work as a reporter and news director for the 17-station GPB radio network, which serves every major city in the state except Atlanta.

I became an expert on rural Georgia during the 15 years that I spent there, but every day I lusted after an Atlanta signal. My colleagues and I knew that an Atlanta frequency would mean more underwriting and membership revenues for GPB and less dependence on state government funding.

When the people trying to #saveWRAS from a GPB news/talk format asked my opinion about the time-share agreement on Twitter, this was my honest answer.

@ChrisShattuck @SaveWRAS It’s good for GPB. It’s not good for WRAS and Atl musicians. WRAS taught me radio so I could work at GPB. Ironic? — Susanna Capelouto (@capelouto) June 6, 2014

The campaign that students and alumni are putting up to keep their eclectic, student-programmed music format at 88.5FM is fascinating to watch. There is a vicious social media campaign that takes cheap, unfair and angry pot shots at my friend Tanya Ott, GPB Radio v.p. and a veteran public radio news director, but it also shows wit, creativity and passion in posts that express betrayal and a fear of cultural loss. In the physical world of the streets and community gathering places, there are #saveWRAS stickers, T-shirts and benefit concerts. Local businesses are supporting the cause to save the station format.

Even Adult Swim, Cartoon Network’s nightly programming stream, joined the fight by creating a 16-second video that it now runs as a bump between shows on its national broadcast.

Almost overnight it seems  #saveWRAS has turned into a brand, a call to arms against “the establishment,” a “stick it to the man” hipster cry with an Occupy Wall Street feel.

Who would have thought that millennial-generation adults cared so much about a terrestial signal? Doesn’t research show that the young don’t “do” radio anymore?

Any professional programmer would agree that WRAS’s weekly cume of 65,000 listeners for a 100,000-watt signal in Atlanta is a waste of public airwaves. So what’s so wrong about providing a public service to Atlantans by airing high-quality midday news/talk programs that would attract more listeners to the station?

When GPB put forth its formidable news/talk schedule for WRAS, I was waiting for core NPR listeners of Atlanta to join the social media conversation and proclaim, “I am glad we will finally get On Point and Here and Now on the FM dial,” or, “I can’t wait for Celeste Headlee’s new daily show! Finally, we Atlantans have a talk alternative to WSB Radio’s Herman Cain Show.”

Personally, I can’t wait to hear these public radio programs broadcast over the air! But there’s been no social media love expressed for the coming public radio news/talk format.

Granted, Atlanta has never had a full-time news station, so local listeners may not know what’s been missing. For public media professionals, I realize that it’s easy to dismiss the social media campaign as an echo chamber without consequences, but, having watched as it spread from online forums into the community, I’ve come to believe that public media can’t ignore the views that are being expressed.

If you strip away the vitriolic tweets, you’ll find a young audience that demands original content. Here are some reactions to the proposed format.

Its sad that @gpbnews believes they can succeed via unoriginal content & lack of choice Is ANYONE ‘clamoring’ 4 regurgitated NPR? #SaveWRAS — Save WRAS (@SaveWRAS) June 11, 2014

@gpbnews #SaveWRAS No one wants your daytime news. That’s how it is. Stop destroying the arts and culture that college radio provides — Ty Douglass (@tybeedoo) June 6, 2014

The perception among these young, media savvy WRAS supporters that quality public radio programs are canned, old or repetitive should send a warning signal to programmers and producers everywhere. These millennials, who are potential core listeners of the future, seem to believe that local noncommercial radio will only be relevant to them if it figures out how to be creative and original.

Maybe the GPB/WRAS channel-sharing agreement can become a real partnership that can blaze a new trail in public radio programming. One that looks around the podcast world for experimental programs instead of waiting for shows that are safely tested money makers, produced for public radio’s core audience. One that’s a little more PRX Remix and less predictably formated. One that allows the college radio creative vibe in to freshen up the sound and create a new brand of noncommerical radio.

I’m very cautiously optimistic, and will be listening with open ears.

Susanna Capelouto is a public radio journalist at heart and former editor at CNN-Radio.  She currently works at CNN.com as a writer and at CNN International as an assignment editor.
ShareTweet EmailPrint More