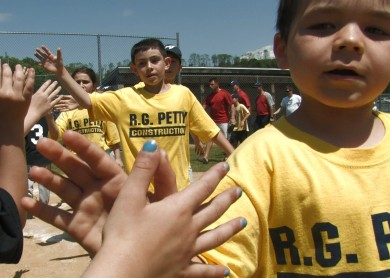 A public television documentary about Little League Baseball is turning into a fitting Independence Day scheduling choice for programmers.

“Given its ‘all-American’ theme,” said Dawn Anderson, spokesperson for distributor American Public Television, “it made perfect sense to release the documentary in early July so stations could schedule it over the long holiday weekend — at the height of Little League season — and as a lead-in to the Little League World Series in August.”

H.E. Humphries of U.S. Rubber, one of the first sponsors of Little League, celebrates with the 1958 World Series runners-up, the Jaycee Little League of Kankakee, Ill. Little League: A History from WVIA celebrates 75 years of the summertime tradition. (Photo: Little League Baseball and Softball)

The hourlong Little League: A History is the only film to date about the iconic summertime rite of passage for millions of youngsters, according to filmmaker Greg Matkosky.

Last April, the Little League organization, based in Williamsport, Pa., invited Via Studios Global, the production division of WVIA in Pittston, Pa., to submit a bid for a film to mark the league’s 75th anniversary. “They invited several production entities,” Matkosky said. “Public television can deliver on national distribution. That undoubtedly gave us a leg up.”

Narrating is another celebrity, Hall of Fame Los Angeles Dodgers broadcaster Vin Scully. Programmers initially expressed concerns with that choice, Matkosky said, since calling a ballgame is a lot different from voicing a film. At last year’s APT Fall Marketplace in Boston, Matkosky said, “some stations questioned whether Scully could sustain viewer interest over the entire film. I’d met him, and I knew that with a little direction he could carry everything.” Matkosky was right: Scully recorded the entire narration in under two hours at NPR West studios.

Another challenge was encapsulating the entire history of Little League in an hourlong film. The organization blossomed from a few scrubby teams in Williamsport to its current international Little League Baseball and Softball, with tourneys in more than 80 countries.

The film doesn’t shy from controversies that arose in Little League’s history. Interviewee Kay Massar cut off her long braids in 1951 and called herself Tubby just so she could play. By 1973, more than two dozen lawsuits were brought by girls demanding that right, and the next year the league opened to them. Now, one in seven players are girls.

The film also addresses the 1955 controversy when the league’s 61 all-white teams refused to play the only all-black team, which hailed from Charleston, S.C. League headquarters insisted that the white teams play the team and lost hundreds of franchises when Southern teams avoided integration by founding the Dixie Boys Baseball organization.

“The film could have been a miniseries, there’s so much human drama there,” Matkosky said. “But APT and the stations wouldn’t want that. So our challenge was taking 75 years and distilling it all into an articulate story of equal parts historical content and emotion.”

Matkosky took advantage of President Bush’s contribution to supply some of that emotional heft. “We used him in the film in three places, very strategically, where his presence lends significance and gravitas,” he said. “He does a great job of articulating the relevance of organizations like Little League and how they define us as Americans.”

The filmmakers also carefully crafted the final product to be timeless, “so it can be broadcast in perpetuity,” Matkosky said. “It was important to us to be evergreen, not only in content but in style.” Very few details are specifically pegged to 2014, he said, so the film will remain fresh.

The documentary premieres June 9 on WVIA and will be available nationally via APT as of July 1. It will also air in primetime July 11 on the World channel with repeats throughout the month. Initial broadcast rights run through June 2017.