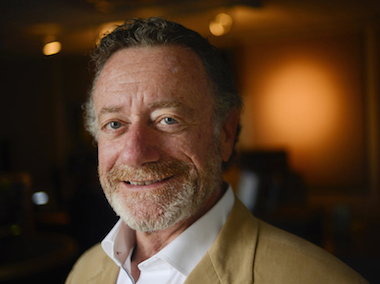 NPR’s new president is a venture capitalist who started in commercial radio as a teen, then earned a reputation in cable television as a pioneering executive who could build audiences for underperforming networks.

Jarl Mohn takes over as president of NPR July 1, and NPR board veterans and station leaders have high expectations for his ability to improve the network’s finances and bolster its relationships with member stations. He’ll be working on a five-year contract — an agreement that many hope will end a long run of churn in NPR’s top job — and has said he’ll initially focus on major-gift fundraising.

Jarl Mohn dedicates new KPCC headquarters bearing his name in 2010. Mohn plans to focus on fundraising in the first months of his NPR presidency. (Photo: KPCC)

Mohn has served on the board of directors at Southern California Public Radio, licensee of American Public Media’s Pasadena station KPCC, for more than a decade.

He began his storied career in media as a rock-and-roll DJ with the pseudonym Lee Masters; in later chapters, he gained extensive experience in building new commercial media ventures and turning around money-losing properties.

His track record also reflects a savvy investor with a knack for getting in at the early stages of new technology.

Mohn’s media background and his experience in adapting to new distribution technologies make him a good fit for the job, said Dave Edwards, g.m. of Milwaukee Public Radio and a former NPR board chair who helped lead searches for Mohn’s predecessors, Gary Knell and Vivian Schiller. But Edwards added that Mohn will find himself on a learning curve as the chief executive of public radio’s biggest distributor and producer, and NPR presidents must also navigate both the politics of the public radio system and the partisan atmosphere in Washington, D.C.

Mastering the intricate relationships of public radio is no easy task, Edwards observed.

“Initially, even though he’s had exposure to public radio from KPCC, he’s going to have to learn a lot,” Edwards said. “There are some things he’s really going to need to focus on — especially the financial situation at NPR. He’s going to have to shore up the budget and be really focused on fundraising and relationships with members of Congress while also focusing on collaborations with stations.”

Mohn replaces interim President Paul Haaga, an NPR board lay leader who stepped into a professional role last fall when Knell ended his two-year presidency. Knell succeeded another interim, Joyce Slocum, who was promoted from NPR’s general counsel to chief exec in 2011 when Schiller was forced out after two years in NPR’s top job.

“NPR deserves” to have a new president on a five-year contract, said Kit Jensen, chair of NPR’s board and c.o.o. at Cleveland’s ideastream. “And Jarl has said repeatedly he’s very interested in staying even longer.”

Mohn started in radio at the age of 15, working at WBUX-AM in Doylestown, Pa. He lived the nomadic lifestyle required of aspiring radio talent, moving to Indianapolis, Philadelphia and Wilmington, Del., before landing in Louisville, Ky., where he would spend most of his radio career.

During those early years of his career, Mohn found a lifelong friend and colleague in Bob Pittman, now c.e.o. of Clear Channel. Pittman hired Mohn for his first job in New York — at WNBC-AM — and also aided his later move to cable TV. As young broadcasters in the early 1970s, both believed in using research as a tool for guiding program decisions, then a novel idea.

As a radio DJ in the 1970s, Mohn was level-headed and “really into reading,” recalls a former colleague. (Photo: 79WAKY.com)

Mohn landed his first job in the Louisville radio market in 1972, working the 9 p.m. to 2 a.m. airshift on WAKY-FM under program director Johnny Randolph.

WAKY was a popular Top 40 station, and Randolph recalls being impressed by Mohn’s intelligence and professionalism as a DJ.

“Usually those guys are half-nuts,” Randolph said, referring to on-air talent of that era. “But [Jarl] really had his feet on the ground. He’d go out and party with the best of them, but he’d always be in control. He’d go out for a little while and then head back and catch up on his reading. He was really into reading.”

Ed Henson, a radio station owner and broker, hired Mohn as program director at Louisville’s WLRS-FM, an album-oriented rock station. Mohn had just returned from a stint at WNBC-AM.

“I thought he was a super talent, a very bright guy,” Henson said. “He’s very versed in running every part of a radio station. He knows how to create magic in radio.”

They worked together intermittently for nearly a decade and shared ownership in an AM country-music station in El Paso, Texas.

Mohn left radio for cable TV in 1986, starting first as general manager at VH1; within six months, he took on oversight of both VH1 and MTV. He led efforts to expand the MTV’s programming mix beyond the music videos that helped to popularize the channel, and is credited for bringing Remote Control and Beavis and Butt-head to the lineup, as well as diversifying the music mix by adding rap videos.

Mohn was fired from MTV in a 1989 corporate power struggle, according to Electronic Media, but moved on to the Movietime Network, a cable channel low in the ratings that, like MTV in its early years, limited its programming to video promos. Mohn recast the channel as E! Entertainment Television, which went live May 31, 1990.

During his eight-year tenure in that job, Mohn earned a reputation for maximizing profits by programming recycled footage and keeping production costs low. He was involved in launching shows such as Talk Soup and E! True Hollywood Story, which used footage culled from daytime talk shows and paparazzi shots of celebrities. In the early 1990s, he brought Howard Stern to cable by arranging for Stern’s terrestrial radio broadcasts to be filmed as a half-hour show for E!

Mohn moved on to a new frontier of media in 1999 as head of Liberty Digital, a publicly traded subsidiary of Liberty Media that invested in interactive television projects and Internet companies such as Priceline.com. According to press accounts at the time, a stock buyback deal that folded Liberty Digital back into Liberty Media made Mohn a billionaire.

After leaving Liberty Digital in 2002, Mohn stopped using his DJ moniker, Lee Masters. He began devoting his time to his investments and civic interests, serving on the boards of nonprofits such as the American Civil Liberties Union  of Southern California, the Annenberg School of Communications at the University of Southern California and his own Mohn Family Trust.

Mohn’s work with KPCC marks one of his longest associations during this period. He joined the board in 2002 and began serving as chair in 2012. To date, he’s directed $7 million in philanthropic gifts to KPCC’s licensee, Southern California Public Radio. He contributed $4 million to the construction of KPCC’s new headquarters, a $24.5 million building named the Mohn Broadcast Center, according to the Los Angeles Times.

Mohn’s extensive involvement with KPCC has bolstered confidence among public radio managers that he makes a good fit for the NPR presidency. His familiarity with the dynamics of serving on a licensee board and his knowledge of how stations relate to NPR will prove a boon for him, said Maine Public Broadcasting President Mark Vogelzang.

“There’s nothing like being in the trenches and knowing about the revenue a local nonprofit needs to keep things in line,” Vogelzang said. “He understands the needs of a local NPR station, even if it is a bigger station. He’s demonstrated that awareness, and that tells me a lot.”

Mohn takes over as NPR continues to downsize under a board mandate to reach a break-even budget by the end of fiscal year 2015. In the latest round of workforce reductions, NPR cut 28 newsroom positions and announced cancellation of Tell Me More as of Aug. 1.

NPR is projecting to end fiscal year 2014 with a $6 million deficit. In a recent interview, NPR Chief Content Officer Kinsey Wilson said the job cuts and cancellation are expected to allow NPR to hit the break-even goal.

“What we’ve done is make a lot of tough decisions this year to clear the table,” said Jensen, referring to the restructuring and job cuts imposed at NPR this year. “It allowed us to move the organization forward and put it in a much better position for a new c.e.o. It wasn’t easy, but it was the right thing to do.”

Mohn is well aware of NPR’s financial challenges and has already shared part of his strategy for bolstering the bottom line. In an interview last month with KPCC’s Take Two, Mohn said he plans to begin his presidency by focusing on fundraising, looking specifically at cultivating more major donors for NPR.

“There are a lot of people who are huge fans and big supporters, and I don’t think we’ve fully taken advantage of that yet,” Mohn said.

On the show, Mohn also described oversight of NPR’s finances as a top priority.

“What I think I can do and be helpful on, hopefully, is to make sure that the organization has the resources that it needs,” Mohn said. “Budgets are tight. There have been deficits reported for NPR, and what I hope I can do is help raise money and help the organization not just survive, but really grow and thrive in a very new and competitive media landscape.”

“Public radio needs to raise significant money,” Vogelzang said. “We are stronger and have more wealth in our communities than people can possibly understand. He ought to help us organize and lead a major capital campaign that would be a game changer. That, for me, is job number one.”

“I have very high hopes for him building on the station and network partnerships that have shown we’re much more than stations and a network separately,” said Mike Crane, executive director of Wisconsin Public Radio. “We can do amazing things together.”

“I think he’s going to have to focus on setting strong development and financial goals so they can right the ship,” Michael said. “And there’s going to be a lot of interest in how NPR will relate to member stations. I hope he continues the bridge-building that’s been happening.”

Mohn has said that his background lends itself to working well with local pubcasters.

“I’ve done every job at a radio station, and I know that business reasonably well,” Mohn told KPCC’s Take Two. “[T]o be able to communicate with the member stations, that’s what my background is, and with the 11 or 12 years I’ve spent working with KPCC, I think that will make the conversation much easier. I’m coming from that side of the table. I think that’ll go a long way to easing some of those tensions.”

Correction: An earlier version of this story mistakenly referred to Mohn as a billionaire. His net worth has not been stated publicly.
ShareTweet EmailPrint More