Suze Orman’s Financial Solutions For You was the top-performing show, garnering a total of $7.6 million, according to final pledge data compiled by PBS and obtained by Current.  Shows featuring self-help guru Wayne Dyer and nostalgic music filled out PBS’s ranking of programs generating the most income from on-air fundraising. 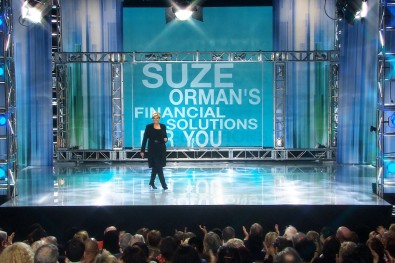 But a non-pledge program surprised fundraisers at stations that slotted it into their drives: The African-Americans: Many Rivers to Cross, a National Program Service documentary series featuring Henry Louis Gates Jr., garnered a whopping $366.81 per minute for the 14 stations that pledged it, raising a total of $704,276. By contrast, Orman’s widely scheduled show raised an average of $54.63 per minute.

PBS does not release or publicly discuss details of pledge results, which are compiled from a sample of its stations. But pledge data from the 33 clients of TRAC Media Services, the pubTV audience analysis firm, generally reflect the trends found in PBS’s report.

“The March drive was very strong, we finished above last year so that’s good news all around,” said Kristen Kuebler, TRAC’s director of station research. Among TRAC clients, Orman generated $2.9 million, she said. The second-ranked show was Dr. David Perlmutter’s BrainChange, which raised $542,646 for TRAC clients. Since Orman’s show debuted during the March drive, it received many more plays on local stations, accounting for the differences total pledge revenues.

The Perlmutter self-help show, distributed by Virginia–based Executive Program Services, has been running strong for pubTV stations over the past two drives. Combined results from the December and March campaigns put total pledge revenues from Brainchange at $4.5 million, said Alan Foster, EPS president. For the March drive, nearly 90 percent of PBS member stations picked it up for broadcast.

Kuebler pointed to the Henry Louis Gates documentary series as a star for the stations that chose to pledge it. Chicago’s WTTW was the first to successfully present it as a pledge program during its December drive, prompting more stations to give it a try last month. Stations “are always looking at regular schedule program with a nice emotional hook that’s mission-oriented and will make people call,” she said.

For TRAC stations, 28 percent of their March pledges came from viewers who donated as sustaining members, up from around 20 percent in December. Self-help shows seem to resonate well with viewers considering sustaining memberships. Three shows drew sustaining member pledges at averages of between 39 percent and 42 percent: Orman’s program, Dr. Wayne Dyer: I Can See Clearly Now and Healing ADD with Dr. Daniel Amen and Tana Amen, RN.

The program with the highest percentage of sustaining members for TRAC clients was the American Public Television offer Rick Steve’s Festive Europe. The half-hour program was packaged with pitch breaks that specifically requested sustaining memberships: 56 percent of pledging viewers responded as sustainers. Signature PBS series such as Nature and PBS NewsHour also received at least a third of their pledges from sustainers, Kuebler said.

Rounding out PBS’s Top 5 highest performing pledge offerings for March were Dyer’s program, with the self-help expert offering lessons from his own life; Moments To Remember: My Music, a re-up starring hosts Patti Page and Nick Clooney; another My Music special, Ed Sullivan’s Rock and Roll Classics — The ’60s; more self-help from 3 Steps to Incredible Health! With Joel Fuhrman, M.D.; and Masterpiece‘s megahit Downton Abbey.

Correction: An earlier version of this story had an incorrect figure for Orman’s total for TRAC stations. This story also has been updated with final pledge results.