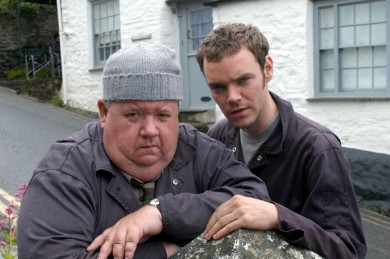 Doc Martin, the British dramedy that has continually expanded its reach and popularity during its five years in syndication to U.S. public television stations, takes a more serious turn in the upcoming sixth season, two of its stars said in a recent interview.

Ian McNeice, the actor who plays rotund plumber-turned-restaurateur Bert Large, and Joe Absolom, cast as his lanky son Al, dropped some ominous hints about the storylines involving their characters during a recent interview with Current at American Public Television’s Fall Marketplace meeting in Boston.

“I think for Al, he gets a bit depressed and a bit lost in terms of trying to make a living for himself,” Absolom said of his sweet but listless character. “He really doesn’t know how. You see him get very stressed.” In past series, he’s dabbled in computer maintenance but ended up once again working at his father’s side.

“It’s quite a dark series, actually,” Absolom said, referring to the new season of eight episodes.

“Quite dark,” agreed McNeice. One storyline involves the two finally moving apart, with Al leaving the house so Bert can open a bed and breakfast.

Despite their characters’ challenges in the upcoming season, the two remain as fond of each other in real life as they are onscreen. They joked about their easy rapport — “Joe calls me ‘Pops’ on set, so we’re like father and son, it’s true,” McNeice said — and both marveled at the number of Americans who recognized them as Doc Martin characters during their appearance in Boston.

As Absolom said, “I’m a paper boy from Lewisham,” a working-class borough in southeast London. “And suddenly I’m in Boston, in a hotel presidential suite, talking to the press about the show. It’s a very odd sensation.”

Doc Martin’  success has spread worldwide, with adaptations now licensed for production in more than 70 countries. Each version shares the same lead character: a promising surgeon who mysteriously develops an aversion to the sight of blood and ends up a general practitioner in his home village, catering to a slew of characters with various odd medical conditions. But there are distinct cultural variations. In Greece, the show is titled Kliniki Periptosi (“Clinical Cases”) and young women in the village frolic in bikinis; in Holland (Dokter Tinus), there’s a backdrop of tulips and a windmill.

Stateside, the original British series is going gangbusters for local public TV stations, some of which began airing it in 2008-09. Ratings have climbed steadily. And during its fifth season in APT distribution, in 2012-13, its reach had grown to stations broadcasting to nearly 85 percent of U.S. television households

Ratings have climbed from a .72 season average for Doc Martin’s 2008 debut on public TV, when the shows aired on stations covering less than 13 percent of TV households, to a .91 for Season 5, according to TRAC Media Services, which analyzes ratings for local stations. For comparison, PBS’s national primetime average household rating is 1.43.

“Doc Martin has seen tremendous growth since it first showed up on public television in fall 2007,” said Craig Reed, director of audience analysis at TRAC. Starting with just over 700 plays on 30 stations that year, it blossomed to more than 11,000 airings in 2010-11 and shot to more than 21,000 plays on some 330 stations last season.

“Stations are relying on it as a quality acquisition to help support the primetime schedule,” Reed said. And it is attracting audiences: during sweeps, he said, it was the top-ranked acquisition series in 2012-13. “While drama has become very popular on public TV,” he noted, “growth on this scale is atypical for an acquisition.”

One factor, Reed said, is that the show is unique as both a comedy and a drama “and it is successful on both counts. We frequently see this with programs that attract large audiences. They are able to cross genre lines and hold an audience while doing so.”

In Britain, Doc Martin is the highest-rated Monday night drama airing on the ITV network. During the eight-episode run of the new season, the show drew an average audience of 8.4 million and a share of 32 percent, more than doubling ITV’s average rating for the time slot, according to international distributor DRG.

The show’s popularity and longevity have surprised members of the cast.  McNeice recalls going into auditions for the series with low expectations. “I thought it was just going to be a one-off,” he said. “If I really want something, I learn the part; if I don’t care too much about it, I just turn up. So, on this one I just turned up.”

Then suddenly he was asked to read lines from Episodes 3 and 4. “And I said, ‘Sorry? This is a series?’ Then I thought, ‘God, I wish I’d learned and tried a bit harder on this.’”

McNeice later scolded his agent for not prepping him for the audition.  “But it didn’t matter because they already offered me the part,” he said. “Happened on that very day, which is great.”

McNeice’s acting career has included roles with the Royal Shakespeare Company in London; the cult-hit British TV series Doctor Who, for which he portrayed Winston Churchill; and the lowbrow comedy movie Ace Ventura: When Nature Calls. But his experience with Doc Martin has been unique.

At a viewer’s request, he recently Skyped with 17 fans worldwide. “I did this conference call at 9 o’clock on a Saturday evening with people all over the world, from Australia, New Zealand, Chile,” McNeice said. “They all introduced themselves and asked questions about the show. It was bizarre but quite wonderful.”

Absolom gained recognition among TV viewers for his role as Matthew Rose on the hit BBC soap opera EastEnders from 1997 to 2000.

“He was the series heartthrob at the time,” McNeice said. “Oh, yeah. A lot of women were after his body.”

“Yeah, I almost forgot about that,” Absolom said, winking.

At home in Portwenn

Storylines for their Doc Martin characters Bert and Al are authentic reflections of life in Port Isaac, the scenic fishing village where the show is filmed, according to the actors.

Bert Large’s career switch from plumbing to running a harborside restaurant, a plot twist in Season 3, may seem like a stretch, but people who live and work in the Port Isaac are similarly versatile and enterprising.

McNeice on location in the Cornish village of Port Isaac, known as Portwenn in Doc Martin. (Photo: APT)

The cast and crew gather for production every other year, “so we’ve been in the village for years,” Absolom said. He’s noticed that lifelong residents often switch jobs, especially to accommodate the growing crowds of fans showing up to watch filming. Residents “put different hats on, they all work that way,” he said. “One of the fishermen’s friends turned his house into a café. So yes, it’s feasible that a plumber would start a restaurant there.”

But the program has also polarized village residents, Absolom said. “When we first started filming there, the village had a couple of art galleries that have since disappeared,” he said. “Now there are shops with Doc Martin T-shirts, because people come for a day trip to see the village and buy a souvenir. They don’t want a painting. They want a coffee and an ice cream.”

Some residents extract their revenge on clueless visitors, according to McNeice. “Fans ask the locals where the surgery is, which is right there in the middle of the village,” he said, referring to the location of Doc Martin’s office.  But the building that’s filmed as the exterior is actually a bed and breakfast. “But the locals have a habit of telling them where the real surgery is,” two or three miles outside of town the other way. “They send them off in the wrong direction,” he said. “They know exactly what the fans want; they do it on purpose.”

On the other hand, Absolom said, the proprietress at The Mote, a popular local watering hole, “gives us free drinks because she says we bring in so much business.”

Absolom has fallen in love with the Port Isaac, which was given the fictional name Portwenn in the TV series. He’s hoping to move his girlfriend Liz and their daughters Lyla and Daisy Mae to the village permanently. Daisy Mae was born at a nearby hospital during filming just six months ago.

“You can’t really take a day off shooting, so I’d work until midnight, then go sit with Liz in hospital,” he said. “At one point the doctor was going to induce labor, so I told him on the phone, ‘Don’t do it until I finish this scene!’ When I left, all the crew was cheering for me. I said, ‘OK, lads, I’m going to have a baby!’”

Now that Season 6 has wrapped production, the two are as curious as the show’s fans about Doc Martin’s future.

“At end of each season we think, well, that’ll be it,” McNeice said. “It’s up to ITV — they’re the people with the money. And Martin, of course.” That would be star Martin Clunes, who owns the show with Producer Philippa Braithwaite, his wife.

In a September television interview when Season 6 premiered in Britain, Clunes said he is open to a seventh season.

6 thoughts on “There’s Large trouble ahead on Doc Martin”