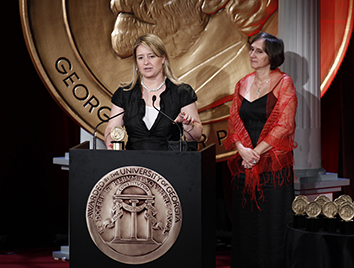 In his detailed examination of the series, Schumacher-Matos argued that the story was unfair, inaccurate and misleading, and that it fell short in backing up key allegations about the state’s actions.

“My finding is that the series was deeply flawed and should not have been aired as it was,” Schumacher-Matos wrote.

In a response posted on NPR’s website, Kinsey Wilson, executive v.p. and chief content officer, and Senior Vice President for News Margaret Low Smith acknowledged errors and shortcomings in the series. But they declined to provide a “point-by-point response” to the ombudsman’s critique. “NPR stands by the stories,” they wrote.

“. . . [I]n re-examining the series, we found the reporting to be sound,” Wilson and Smith added. “The patterns the series identified were well-documented.”

The executives also found fault, in turn, with Schumacher-Matos’ investigation. “[T]he process surrounding the ombudsman’s inquiry was unorthodox, the sourcing selective, the fact-gathering uneven, and many of the conclusions, in our judgment, subjective or without foundation,” they wrote. And they added that “the ombudsman’s interaction with state officials over the past 22 months has impeded NPR’s ability to engage those officials in follow-up reporting.”

The report and subsequent rebuttal drew the attention of media reporters, experts in journalistic ethics and others in public media.

“I’ve never seen any ombudsman report to be this complete and comprehensive,” said Jeffrey Dvorkin, NPR’s first ombudsman, former v.p. of news at the network and a former president of the Organization of News Ombudsmen. NPR’s rejection of the ombudsman’s criticism was also unusually strong, Dvorkin said. (Dvorkin has written about the subject on his blog.)

Schumacher-Matos declined to comment further to Current and left the country for two weeks after his report appeared online.

The 2011 series won a Peabody Award, a Robert F. Kennedy Award and a Casey Medal. It also spurred politicians and advocacy groups to act. South Dakota’s American Civil Liberties Union chapter received numerous calls from concerned state residents, according to a 2011 Associated Press article, and the organization filed a class-action complaint against the state’s Department of Social Services.

The National Congress of American Indians passed a resolution in 2011 supporting the findings of NPR’s investigation and asking Congress to investigate further. Members of Congress asked the Department of the Interior to look into the investigation’s findings and requested an oversight hearing about enforcement of the ICWA.

NPR’s reporting also drew condemnation from the office of South Dakota Gov. Dennis Daugaard, which issued a rebuttal before the series even aired. The governor’s office claimed that the NPR report was “based on incorrect information, half-truths and an obvious desire to create a story rather than report the facts of the matter.”

The ombudsman reached a similar conclusion in his six-chapter report, identifying numerous flaws and inaccuracies and pointing out aspects of the foster-care system in South Dakota that the series overlooked.

He built his case through extensive reporting of his own, including information provided by Kim Malsam-Rysdon, secretary of South Dakota’s Department of Social Services, who had also condemned the NPR reports.

She met with Sullivan just once during the course of NPR’s initial reporting, and afterward DSS officials became less cooperative. “Malsam-Rysdon told me she felt that Sullivan and Walters had made up their minds, and so she didn’t want to meet more with them,” Schumacher-Matos said. He acknowledged that it was “in the interests of the officials to cooperate with me.”

The ombudsman also pressed Sullivan for more information, and she declined to answer some of his questions, he said.

In some instances, Schumacher-Matos located errors in the series. He charged that the report overstated the financial benefit to South Dakota’s government for removing Native children from their families’ homes. The series stated that South Dakota receives $100 million annually for foster care from the federal government. Advocacy groups cited that same figure in reports to Congress and in other publications.

But, as Schumacher-Matos pointed out and Smith and Wilson acknowledged in their editors’ note, the amount is probably closer to $40 million than $100 million.

Sullivan also stated that 33 foster children from one tribe were put in white foster homes. But tribal leaders and the state of South Dakota affirmed to Schumacher-Matos that 15 of the 33 children were in fact put in Native homes.

Schumacher-Matos went deeper in his criticism, arguing that the series oversimplified a complicated subject, and he explained at length aspects of the foster-care system that the series did not address.

“The series . . . was unfair in cherry-picking facts to make the worst case possible,” the ombudsman wrote. “It failed to provide the crucial socioeconomic, programmatic and statistical context that totally changes the complexion of the story and challenges its conclusions about a culturally biased motive driving court-ordered removals.”

He argued that that Sullivan and Walters glossed over the dangers of child neglect, failed to explain the role of tribal judges in placing Native children in homes and overlooked the shortage of Native homes available for foster children.

Wilson and Smith ceded other points. For instance, they acknowledged that Sullivan should have tried to reflect the state’s position through other sources after the DSS declined to cooperate further.

South Dakota’s governor found vindication in Schumacher-Matos’ report. The ombudsman “clearly was interested in getting to the heart of the story and understanding what was really going on,” said Tony Venhuizen, a spokesperson for Gov. Daugaard. “We felt that he did a good job.”

A story by media reporter David Folkenflik was the sole mention of the ombudsman’s review on an NPR broadcast. NPR has no plans to respond further to the ombudsman’s report. It will not correct any inaccuracies or acknowledge the story’s flaws on air, according to spokesperson Anna Bross. “The report aired nearly two years ago,” she wrote in an email.

The network’s response to its own ombudsman drew criticism from some media watchers. “Wrong answer,” said On the Media host Bob Garfield in a commentary on his show. “When a national news organization invites listeners to believe a government is kidnapping children and the audience’s representative cites eye-popping statistics, ‘agree to disagree’ is an evasion of responsibility. In the face of the ombudsman’s allegations, nothing less than point-by-point response will do.”

“It’s strange to say, ‘Your reporting is terrible, you got a bunch of things right and we’re not going to respond any further,’” said Andrew Beaujon, who covers media for the Poynter Institute’s website. “I don’t really understand their reasons for not responding in more detail.” (Beaujon wrote about the issue here.)

Kelly McBride, a senior faculty member with Poynter, agreed that NPR’s response seemed inadequate. (McBride also wrote about the dispute for Poynter.) The network should correct the errors it noted on the original stories and should have engaged more fully with the ombudsman’s criticisms, she said.

But she added that Schumacher-Matos did himself a disservice by writing such a long report. “This report is disproportionate to the failings of the original journalism,” she said. The ombudsman also invalidated “the Native American voice trying to express the pain and suffering of families’ separations.” Several Native Americans told McBride they were upset that the ombudsman devoted so much effort to discrediting the series.

“When you read this [ombudsman’s] report, so much of it is so easy to argue with” that NPR’s leaders may not have recognized the more significant shortcomings of the series, McBride said.