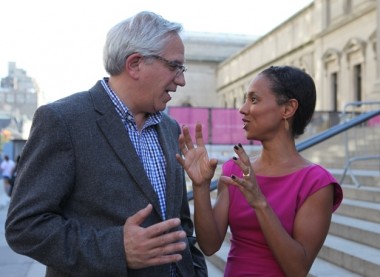 History Detectives, the PBS series featuring amiable sleuths who truth-squadded stories behind historical items and artifacts, will instead take on bigger cases in a revamped and retitled series to debut next summer. History Detectives: Special Investigation will also be known as HDSI, in TV crime drama parlance.

PBS recently ordered four episodes of the reworked show, a reduction from the nine to 11 that aired during summer seasons going back to 2003.

PBS’s chief programmer Beth Hoppe sees the limited run, scheduled for next summer, as a trial for the new approach. “If it resonates with audiences, and is as excellent as we are expecting, we hope to order more” for 2015, she said. The program is on broadcast hiatus this year.

HDSI will introduce a new host, a pared-down team of detectives and a streamlined format of gripping mysteries from the past. Instead of researching the authenticity of several historical artifacts within each program, the team will dig into one cold case from American history per episode, such as the disappearance of Teamsters boss Jimmy Hoffa in 1975.

“Everyone may think they know about Jimmy Hoffa but — I promise you — they don’t,” said series co-executive producer Chris Bryson of Lion TV in New York City.

The original History Detectives format was unique when the series debuted a decade ago, said David Davis, co-executive producer and v.p. of television at Oregon Public Broadcasting. Its team of detectives revealed stories behind an assortment of keepsake items, such as a commemorative brooch supposedly created from a piece of the Liberty Bell, a Colonial-era $6 bill and a guitar that was said to have belonged to Bob Dylan.

The show even made international news last June with one artifact that its detectives investigated and found to be authentic: a diary that had been taken from the body of a North Vietnamese soldier killed in 1966. Producers turned the diary over to U.S. Secretary of Defense Leon Panetta, who presented it to Vietnam’s defense minister in Hanoi.

But now, at least 14 television series on multiple networks are investigating or valuing found objects, and “one program is almost a direct clone,” Davis said. That would be CNBC’s first reality series, Treasure Detectives, which premiered in March.

The replication of its format has cut into the audience for History Detectives, and inconsistent scheduling has added to its ratings challenges. “It used to run on Mondays after Antiques Roadshow, which was a good lead-in,” Davis said. But in 2011 PBS moved the show to 8 p.m. Tuesdays, where in many markets its lead-in was PBS NewsHour; its average Nielsen ratings fell 30 percent, from a 1.3 to 0.9. (At the time, PBS national primetime ratings averaged 1.4). Then last summer the detectives competed for viewers with the Summer Olympics from London, and the GOP and Democratic presidential conventions displaced it from the schedule. Its average rating sank further, to 0.8.

“We just felt the ratings were less than we’d hoped for, whatever the reason,” Davis said. “The theory, in part, was it wasn’t unique anymore. We wanted to reinvent it with a new format.”

PBS programmers “loved the personalities” on the show, Hoppe said, but minute-by-minute Nielsen ratings showed that viewers tuned out if they weren’t interested in an object. “So we came up with the idea for researching one big, iconic story through a multifaceted approach, uncovering new evidence and telling stories people haven’t heard before,” she said.

Lion, OPB and PBS “kicked around a number of ideas” for subjects, Davis said. The team began with a list of “a dozen or so,” and ended up with four: In addition to Hoffa, the new show will investigate the disappearance of big band leader Glenn Miller on a flight during World War II; the sinking of the SS Sultana at the end of the Civil War, which claimed more victims than the Titanic; and the unsolved murders of a string of servant girls in Austin, Texas, in the 1880s, victims of America’s first serial killer.

To avoid alienating longtime fans of History Detectives, producers worked to retain some familiar elements. “There’s a loyal viewership, so we want to bring those viewers with us to this new show,” Bryson said. The pacing and feel of the show will remain the same, as will the theme music, Elvis Costello’s first big hit, “Watching the Detectives.”

Although the number of detectives has shrunk, two veterans are returning:  Wes Cowan, the owner of an auction company who holds a doctorate in anthropology; and Tukufu Zuberi, a history documentarian and professor of race relations at the University of Pennsylvania.

The new host, Kaiama (pronounced ki-YA-ma) Glover, is an associate professor of French at Barnard College, Columbia University, where she teaches literature of the French-speaking Caribbean as well as sub-Saharan West African cinema.

Glover came to Bryson’s attention through a YouTube video of one of her lectures. In the clip, “she was energetic and fun,” he said, “and you could tell students were watching her intently. She looked like she might be good on television.” During auditions with some half-dozen candidates, producers were “really impressed by her ability to take direction and treat the camera as a friend,” Bryson said.

While the detectives and their producers investigate their next batch of mysterious stories from history, stations can continue to run the original History Detectives. The rights to the first 10 seasons have been cleared for 10 years, Davis said.

22 thoughts on “History Detectives promoted to investigators in series revamp”