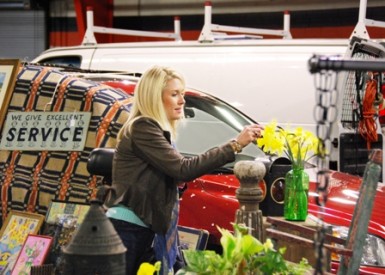 Miller Gafney is one of four "pickers" in Market Warriors, from the producer of Antiques Roadshow. (Photo: WGBH)

PBS has ended production of Market Warriors, the Monday-night series that was a lynchpin in its strategy to hold on to viewers of Antiques Roadshow, the most-watched regular series in the primetime schedule.

The cancellation is the first major schedule change under new Chief Program Executive Beth Hoppe and a disappointment for producers and programmers concerned about public TV’s ability to develop and successfully launch new series — especially at WGBH in Boston, which produces both Antiques Roadshow and Market Warriors.

Miller Gaffney is one of four “pickers” in Market Warriors, from the producer of Antiques Roadshow. (Photo: WGBH)

In a statement provided to Current, Hoppe said that Market Warriors “earned a number of fans” but “did not retain and engage as much of its lead-in audience from Antiques Roadshow as we had hoped.” PBS declined to answer further questions.

The cancellation also is a setback to PBS’s ongoing effort to rebuild primetime viewership by pairing programs with similar audience appeal, creating better flow across the schedule each weeknight (Current, Jan. 17, 2012).

After the last new episode of Market Warriors airs April 22, PBS will schedule Roadshow repeats in its timeslot, 9 p.m. Eastern on Mondays, at least until fall, according to spokeswoman Anne Bentley.

“We will continue to look at new shows across genres that are interesting and engaging for viewers,” Hoppe said in her statement, “and help stations attract new audiences or build an audience over the course of a night.”

It was public TV’s attempt to catch up with an audience craze that started with the 1996 debut of Antiques Roadshow. The PBS series was a knockoff of the popular BBC series of the same name and, at the time, “we were the only ones in the genre,” said Marsha Bemko, executive producer of Roadshow and Market Warriors.

Although strikingly similar to the BBC One series Bargain Hunt, Market Warriors was an original idea developed by Bemko and her Roadshow team, she said. Four “pickers” scour flea markets for interesting items to purchase and later auction, competing to make the biggest profit with their finds.

The program was structured differently than Roadshow, and that may have been part of its problem, said Craig Reed, audience analysis director at TRAC Media Services. “The focus in Market Warriors is on the characters and casting,” he said. “The focus in Roadshow is not the people, although they play an integral part. It’s the short narrative arcs, objects and the personal reactions that are important. Roadshow is full of facts and history, which are not as prevalent in Market Warriors.”

Also, viewers experience far fewer payoffs when they watch Market Warriors — just one singular moment when they discover which picker made the most cash. Roadshow offers multiple rewards throughout the hour as viewers learn the often surprising appraised values of each of the items presented throughout the show, Reed noted.

Nielsen ratings for Market Warriors weren’t what anyone had hoped for, but they weren’t bad for a brand-new series. Weekly episodes earned a 1.2 average rating from the series’ July 2012 debut through Feb. 25, with a high of 1.7 and low of 0.9. The ratings were below last season’s (2011–12) second hour of Roadshow repeats, which averaged 1.6, but they beat those garnered by the various programs that aired in that slot during the 2010–11 season, which drew a 1.1 average, Reed said.

Reed was “puzzled” that PBS canceled Market Warriors so quickly. History Detectives, among the last new series to earn a continuing slot in the PBS primetime schedule over extended seasons,“took a couple of seasons to catch on,” he said. “Market Warriors was getting better. The characters were fine-tuned as it went on, the structure was improved. The ratings were heading up.”

History Detectives launched in 2003 as a co-production of Oregon Public Broadcasting and Lion Television. Like Market Warriors, it was built on a less-expensive production model that presented educational content in an engaging way.

What killed Market Warriors, Reed said, “was expectations, when it didn’t immediately hit.”

Bemko also saw Market Warriors as steadily gaining ground and struggled to explain the cancellation. “I never felt it wasn’t catching on,” she said. “The ratings were doing well. I honestly don’t know what happened. We’re proud of the year we put out there.”