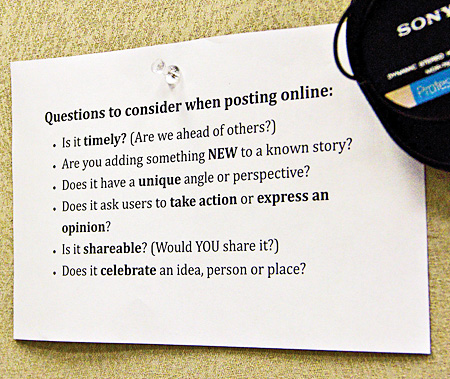 Stories that sing on-air may choke online. What criteria do you use to prioritize stories for each platform? Leave a comment below.

At KPLU, Seattle’s dual-format news/jazz station, an early gamble to take a decidedly different approach to online news has paid off with quick growth and unexpected insight.

Stories that sing on-air may choke online. KPLU gives online priority to stories that meet at least two of these criteria. What criteria do you use to sort stories that will succeed online? Leave a comment below.

The process began in earnest in 2009 after we learned what can only be described as a “hard lesson”: Think twice before undertaking a ground-up overhaul of your digital platforms without substantially more resources than you expect to need. Developers who underestimate the complexity of the process will cost money and time — potentially setting you back a year or more.

We moved on to learn other lessons — throwing out old assumptions of what the digital face of KPLU should be and who it was there to serve.

To achieve our new goals, we adopted NPR’s new Core Publisher platform. In early 2011 a dozen of us spent a revelatory week with two NPR trainers adjusting how we think about online content.

That began a never-ending roller coaster of change, including some emotional concessions to the way digital news is evolving. Our news team — consisting of four full-time reporters, one part-time reporter, four news hosts and our news director, Erin Hennessey — had worked hard to learn how to write compelling web text, but our next challenge was helping the audience find it.

After launching Core Publisher in January 2011, we saw the expected jump in traffic that happens when obvious changes rouse the curiosity of your audience. In the three months following our full re-launch, we saw a 24 percent increase in visits and a 40 percent increase in unique visitors.

To support our efforts in summer 2011, we expanded the digital team — it had consisted of a full-time multimedia manager plus a digital intern — adding former Seattle Post-Intelligencer web journalist Jake Ellison as a much-needed online managing editor.  At that point, things began to take off.

The news and digital teams remained separate but worked collaboratively toward a common goal: competitiveness in the region’s online market for news. Digital relevance would require both our radio and online staffs to acknowledge the strengths of both media. Each had to learn from the other’s victories and defeats. We watched our analytics with deep curiosity and furrowed brows. We relentlessly eyed our users as they came and went on Chartbeat, our real-time online traffic monitoring tool, and in our social-network analytics — analyzing the numbers of comments, stories shared and “likes” that readers sent our way. Not so suddenly, trends started to emerge.

After reviewing our highs and lows, we began to notice something. The winning posts had commonalities — themes, ideas and characteristics that appeared to give them life in the sea of content online.

But these stories were also a minority of what we offered online. Being a small newsroom without the resources to compete with larger local online news outlets, we filled our online news hole by “webbifying” our radio stories — converting them to text and a web-friendly story structure — but most of the web stories were buried, almost unread.

One of the many truths that would significantly influence our strategy was discovering that, as much as we hated to admit it, few users would ever troll our home page for news.

If we were to be found, we largely had to count on users’ searches and mentions in social media. We had to be much smarter about our content so that users would not only find us but also choose to read our post over the other 10 stories reporting on the same subject that day. Our news was important, but posting it was not so important if no one saw it.

Based on lessons learned in our digital training, we developed our own “web rockstar checklist” that now hangs in every reporter’s cubicle. It was the closest thing to a rubric for measuring our output against what we learned about what works with our users.

Our work with another NPR Digital Services project helped reinforce the lessons we were learning about content relevance. As an early user of NPR’s Core Publisher platform, we were lucky enough to experiment with geotargeting selected content to a local audience through NPR’s Facebook page.

This well-documented success, now being tested with other NPR stations, undoubtedly bumped our numbers up. Moreover, the results with specific stories showed us again that it wasn’t enough just to take a web post we thought was exceptional and submit it to NPR’s Facebook page, even though that would automatically put it in front of thousands of additional eyeballs.

With stories that scored low on our checklist, we could hear an enormous digital thud when we put them in front of this coveted digital audience. The topic still had to resonate with users — or it would die. It had to be a checklist rockstar.

Finding just one hook that distinguished our story was the difference between 50 and 5,000 pageviews. Even though these users were already NPR fans, they demanded content that stood out.

By early 2012 we were thrilled with our progress overall (visits up 101 percent;  pageviews up 63 percent; uniques up 149 percent), but we were still posting an unsettling number of excellent stories that relatively few people would ever see.

What if the radio story we were working on that day was, in fact, not a checklist rockstar? Should we still do a post? Enter Version 2.0 of our online strategy. It was clearly not enough to post because we thought we needed to or merely wanted to. We had to question whether and how it should go online: Why is this story worth the extra time and effort? How will users find it? With users judging the post mainly by its headline, caption and picture, without reading a line of text, how can it make the cut?

Though we will continue to archive the audio of every story online, this strategy shift may mean that the text for some stories will be reduced to a headline and a paragraph.

We were willing to gamble that strategically concentrating our labor on one post, in the hopes of reaching thousands, was better than producing multiple posts that reached only hundreds. Though the change ruffled some feathers, we needed to aim our stories selectively to two different audiences. Many radio stories could be reworked to hit the online checklist; some probably could not survive on both platforms.

Running with this idea — separately planning our output for the two media — has already produced some interesting results.

For one story, our education reporter, Gabriel Spitzer, worked with our online managing editor to build out a web post more than a week before the radio feature aired. The story, about what students think future classrooms will look like, became a well-attended media event. The in-depth radio feature required significant time and editing, but by doing a thorough multimedia post well before the broadcast, we were able to find an online audience before the timeliness of the web had passed.

On the other hand, a post by our science reporter, Keith Seinfeld, “How an experiment by blind mice could help humans see,” went online days after we aired his breaking-news report on radio. Keith had the time to circle back to the story and dive deeper into the science for his online takeout.

Based on lessons learned, we’re betting that neither of these stories, handled in the traditional way, would have reached the thousands of people who found them online — thousands who got the stories because we asked some simple questions such as: Why will people choose this story?

We should know the answer before they do.

Jennifer Strachan is assistant g.m. and director of public media at KPLU, Seattle/Tacoma. She has worked in broadcasting for more than 20 years — the past nine in programming, production, news and digital jobs for public media.Photo courtesy of KPLU. Email: jstrachan@kplu.org