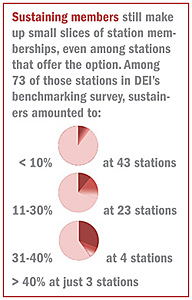 Public radio stations have widely adopted sustaining-member programs over the last several years. Because of this, one might assume that a significant number of sustainers contribute to public radio every month.

However, the reality for most public radio stations is quite the opposite. Across the public radio system, sustaining-member programs, which focus on gaining and retaining donors who contribute at intervals without a predetermined end date, make up only a small portion of an individual station’s overall member program.

Consider the results of DEI’s 2011 Benchmarks for Public Radio Fundraising survey. The large majority of stations — 73 out of 100 participating in the study — reported having sustaining members. But for most of these stations, the percentage of sustaining contributors within their overall member program is 10 percent or less. Only seven stations show that a third or more of their members are sustainers. And only three stations report a sustainer rate of more than 40 percent.

There is, however, something impressive here. Nearly 245,000 public radio sustainers contribute a total of close to $33.5 million annually, or an average gift of about $137. And this is one of the key characteristics of sustainers. They give more per donor than other members, and they have a much greater lifetime value.

As we see it, the small number of stations with large, fast-growing sustaining-member programs means that a large number of stations face a lot of untapped potential. We see a huge opportunity for stations to increase revenue by recruiting more sustainers. We think every station would benefit greatly from making at least a third of their members sustainers within two years and making at least 50 percent sustainers within three to four years.

What’s standing in the way?

It’s not a lack of information. The how-tos of starting and running a sustaining-member program (also known as recurring, monthly or regular giving) are readily available. We laid them out in Current two years ago.

Most stations simply added sustainers to their member programs as a new way to pay without taking the next important step of changing their business model. This isn’t just about adding another way to pay or creating a steady monthly cash flow that evens out the peaks and valleys of on-air membership drives. It’s about adopting a new model that assigns top priority and focus to acquiring and keeping sustainers.

That means overhauling every aspect of the membership program — including mail, telemarketing, email, online contribution forms, call-center scripts, drive messaging, and giving amounts — so that acquiring sustainers becomes a station’s primary objective across every interaction with listener-contributors. It means changing back-office processes and abandoning “pledge” drives for “sustainer” drives. This is hard work. It takes rock-solid commitment from the member program staff and from senior management.

It’s time to stop calling on-air campaigns “pledge” drives; doing so keeps everyone in the mindset of an outdated business model. Sustainers don’t “pledge.” They commit their hard-earned money to stations every month. Ban the word “pledge” from your organization.

Stations continue to bring new members on board as nonsustainers. New members should be acquired as sustainers with their first gift. Many stations waste time and money trying to convert new members into sustainers through special efforts or, worse yet, wait until the renewal cycle kicks in to try to renew nonsustainers. By then, according to industry averages, six of those new members won’t make a second gift.

… to figure the fiscal gain from developing sustainer membership relationships. Appleby Arganbright’s calculator is an Excel spreadsheet, in which you insert your station’s data on average gifts, retention rates and memberships.

Getting prospective members to your website or to call to make a gift is only half the battle. Once they’re there, make it easy for them to become a sustainer immediately. This is accomplished by creating donation forms and call-center scripts that focus on sustainers by emphasizing monthly giving amounts instead of single gifts. It also requires year-round educational messaging about the benefits of sustaining memberships for both the donor and your organization.

Stations rely too much on revenue from “pledge” drives. In another finding from DEI’s latest benchmarking survey, the median station relies on drives for more than 40 percent of its member revenue. Some are more than 60 percent drive-dependent.

This source of unpredictable revenue, meanwhile, disrupts regular programming, irritating the station’s most loyal listener-contributors. In public radio, these drives mostly earn revenue from existing and lapsed members over and over again. Stations that rely on them can’t progress toward solidifying their membership base and expanding support from those who want to contribute their money.

Senior leaders who believe that drives are the easiest and least expensive way to generate member revenue need to think again. It’s easy to create an illusion of success with “pledge” drives that have ever-increasing dollar goals and that don’t emphasize sustaining members and retention, but don’t be fooled.

One way to mitigate this is to call on the services of experts by outsourcing mail and replacing those “free” volunteers with a professional inbound call center to answer phones during drives. This will help maintain quality assurance as staff come and go. Using outside expertise will also provide the opportunity to apply new strategies and tools that truly will make a difference.

Stations have plenty of data but not enough information or analysis. Most stations have a lot of data that they could use to raise more money from more givers over a longer period of time. Data can show stations the value of sustainers or, in other words, the damage of attrition.

Yet many don’t dive into this information to inform decisions about the members and sustainers in their donor files, as well as overall giving trends. Station databases are full of rich information. Use it.

Think of it as replacing one well-worn business model (for pledge-responsive nonsustainers) with a new dependable, revenue-rich model (for sustainers). To succeed, this business model requires efficient and responsive back-end staffing and systems as well as good customer service. Success takes effort, time and resources.

If a station really wants to make a difference with individual giving, its staff and leadership must decide to transform their annual-member program into a comprehensive sustaining-member program. Practices that lead to nonsustainable revenue must be replaced.

The change won’t be easy to make, but once it’s completed, it will result in vast increases in sustainable revenue that secures and expands our public service.

Valerie Arganbright and Barbara Appleby recently launched their own St. Paul-based consultancy, Appleby Arganbright LLC, building on their years of strategic fundraising work on behalf of Minnesota Public Radio, DEI and NPR, among others. Arganbright expanded MPR’s sustaining-member program from 5,000 to more than 70,000 donors in less than five years, establishing it as one of the most successful sustaining-member programs in the country. Appleby developed and implemented several fundraising initiatives that set new standards for public radio, including the 3 Million Giver campaign and DEI’s Benchmarks for Public Radio Fundraising.
ShareTweet EmailPrint More

One thought on “Why don’t more stations adopt ‘sustainer’ ways?”