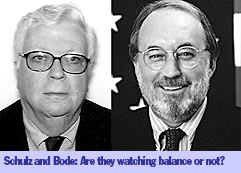 Inspector General Kenneth A. Konz found fault with much of former Chairman Kenneth Tomlinson’s balance crusade, but his report did validate the creation of CPB’s ombudsmen, the corporation’s stated tool for dealing with audience concerns about program balance and objectivity.

While Konz criticized the unilateral manner in which Tomlinson selected veteran journalists Ken Bode and William Schulz, he concluded that “by expanding the public’s ability to have issues of objectivity and balance addressed,” the addition of ombudsmen was “consistent with” CPB’s responsibilities (separate story).

“The legislative statute requires that public broadcasting be objective and balanced,” Chair Cheryl Halpern told reporters in September. “The ombudsmen were put in place to [help] CPB function within the constraints of the legislation.” But more than six months after CPB engaged Bode and Schulz to assess program balance and objectivity and handle complaints, they have seldom written on these issues in general terms and not once have they responded to audience concerns about the balance and objectivity of specific programs.

When CPB set the ombudsmen to work, Tomlinson told Current they would review news content, but many of their reports have focused on cultural documentaries that aren’t particularly journalistic, such as No Direction Home: Bob Dylan, Richard Rodgers: The Sweetest of Sounds, and The Appalachians.

Of the nine reports filed by the part-time monitors since April 26, three praised public TV docs, two were on NPR news reports from Iraq (Bode did note that the reports “gave a nuanced and balanced view”), one lauded Mississippi PTV for covering a high-profile trial, and one was an “ombudsman operating manual.”

The remaining two mentioned audience concerns about balance issues but only one — Bode’s Sept. 1 piece — addressed them directly.

The opinion that “NPR and PBS are the most important remaining sources of accurate, in-depth news in America today. . . is by far the prevailing view expressed on the Ombudsmen’s Website,” Bode wrote. “. . .My own conclusion is no different than my perception of PBS and NPR when I accepted the position of ombudsman in April—that considerations of fair and balanced is [sic] not as big a problem here as elsewhere. This is not Fox News.”

Schulz also acknowledged general audience comments ranging “from the thoughtful to the (occasional) near hysterical” about the ongoing balance controversy as part of his Sept. 13 report. But the report itself focused not on a program but a July congressional hearing. (In the essay, he described comments by a panelist who opposed federal funding of public broadcasting as “food for thought.”)

Considering that NPR has had Jeffrey Dvorkin working as its ombudsman since 2000 and PBS named longtime journalist and former Washington Post ombudsman Michael Getler to the position in October, are the CPB ombudsmen really necessary?

“If I were CPB,” said Byron Knight, who oversees Wisconsin’s statewide networks, “I’d say, ‘Gosh, thank you, PBS, for picking up on our example. We probably only need one [TV] ombudsman and will discontinue the thing.’”

Asked if she was satisfied with the office, CPB President Patricia Harrison said, “Let me just say that as we move forward we will be looking at the ombudsmen.” CPB may do so early next year, she said.

“Clearly I think it needs to be looked into: Just how is it going to function? What does it do?” she said after last week’s board meeting.

Bode declined to comment and Schulz did not return e-mails.

Journalistic ombudsmen are typically intermediaries between editorial staffers and the public—they respond to inquiries, report to the public in regular columns, judge the journalistic merits of controversial stories and counsel reporters and editors privately on ethics and other issues.

They inform the news staff about how its reporting is perceived “and inform the audience about how the media operates,” said Dvorkin, a past president of the Organization of News Ombudsmen.

The CPB duo was controversial from the start because the corporation has a politically appointed board and is seen as a funder, not a producer or a broadcaster.

“What is the role of ombudsmen in an organization that doesn’t even have its own listeners or viewers?” Geneva Overholser, a former Post ombudsman, wondered at the time. “Are they there to protect the board from political firestorms? That seems like a distortion of the ombudsman concept.” The Organization of News Ombudsmen, unclear on whether Bode and Schulz qualified as news ombudsmen, declined to give them full membership.

Others thought the fact that CPB named two journalists smacked of forcing left-right conflicts into a position that should speak for universal journalistic values.

Tomlinson said he hired two ombudsmen because “he wants a diversity of views along the ideological spectrum,” according to an April 28 NPR report. Tomlinson told Current simply that, “I think broadcasting has moved beyond the one-voice approach.”

Bode and Schulz told Konz they considered the positions to be nonpartisan.

Bode, a journalism professor at DePauw University in Greencastle, Ind., and former dean of the Medill School of Journalism at Northwestern University, worked for the New Republic, NBC and CNN, among other news outlets. He was moderator of PBS’s Washington Week in Review from 1994 to 1999. Schulz, like Tomlinson, was a longtime editor at Reader’s Digest.

Jeffrey Dvorkin, who has been NPR’s ombudsman since 2000, describes his first year on the beat.

CPB appoints two ombudsmen, April 2005. They get a cool reception from some observers even before they start writing.

PBS hires its first ombudsman, Michael Getler, who did the job for the Washington Post, September 2005.

Essays by CPB ombudsmen Schulz and Bode on CPB’s website.

Salon media critic Eric Boehlert wrote in spring 2005 that while there are plenty of questions surrounding CPB’s new content monitors, “it is CPB’s tapping of two ombudsmen that has most raised eyebrows in journalism circles.” Said NPR ombudsman Jeffrey Dvorkin: “I don’t think ombudsmen should be in the Crossfire business.”